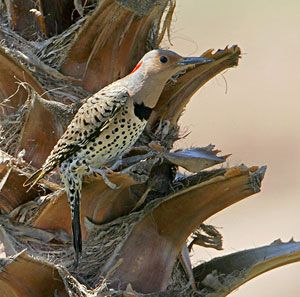 Profile by Richard Gibbons:  The Northern Flicker is a large woodpecker with an overall brownish appearance. Their heads are slim and rounded and they have a slightly down curved bill. Their tail is long and flared and is tapered to a point. They are mainly brown in color with black spots, bars and crescents.They have a white patch on their rump that is mainly visible while they are perching. The Northern Flicker can have either yellow or red coloring of the underside of their wings and tail feathers.Yellow-shafted Flicker is predominately in eastern and northern North America, while the Red-shafted Flicker occurs in western North America. At one point these two forms were considered different species, however, they hybridize extensively from Alaska to the panhandle of Texas.

Northern Flicker is often found in open habitats near trees. Their diet consisting primarily of ants and other insects. They can also be seen feeding on beetles, termites, caterpillars, fruits and berries in the fall and winter. Unlike other woodpeckers the Northern Flicker prefers to find its food on the ground rather than while climbing up the trunks of trees and hammering on the wood. Like many other woodpeckers, they fly in an undulating path using heavy wing flaps that are interspersed with gliding.

They often nest in cavities, around 6-20’ above ground, of dead wood and tend to favor pine, cottonwood, and willow trees. In the northern part of their range they tend to favor trembling aspens. Both the male and the female excavate the cavity. The pair will often reuse cavities that they or another species constructed a previous year. The female lays 5-8, sometimes 3-12, white eggs. Both sexes will incubate the eggs for approximately 11-16 days. Both adults will feed the young which will leave the nest at about 4 weeks. They are still fed by the adults, but will soon follow them to foraging sites in order to feed themselves. Most pairs have 1 brood per year, but some pairs in the south have 2 per year.

Unlike most other woodpeckers, Northern Flickers are strongly migratory. The Yellow-shafted Flickers located in Alaska and Canada travel the greatest distances. They tend to travel east and then south moving down the Atlantic Coast in the fall. The Red-shafted Flickers move shorter distances, mainly southward. Those that are in the mountains will move into lowlands while some spread eastward on the Great Plains. 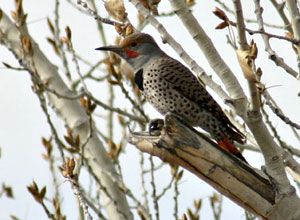