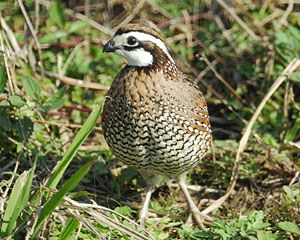 Profile by Jess McClean:  The Northern Bobwhite is a small quail found from prairies in the Midwest all through most of the eastern United States. In Texas, it is usually found to the east of the Pecos River and into the panhandle. There are 22 subspecies of Northern Bobwhite found across the United Sates. Males and females are similar in appearance, with brown, rufous and black bodies and black and white mottled bellies. Females have a pale, buffy throat and eyebrow while males have a striking black and white head pattern and white throat. Their distinctive, clear "bob-WHITE" whistle is an easy way to identify this bird.

Northern Bobwhites live in open pine forests, grasslands, and overgrown fields. They are highly social birds and can often be found in groups of up to 20 individuals foraging or roosting together at night in the fall and winter. However, during the breeding season (mid-March- early October) males will fight to attract females. Originally thought to be monogamous, it was recently discovered that both males and females can have multiple mates in one breeding season.

Sadly, populations of Northern Bobwhites have been steadily declining since the 1930s, with an 85% decrease in population size between 1966 and 2014 according to the North American Breeding Bird Survey. This is primarily due to habitat loss and degradation caused by urbanization, changes to practices in agriculture, and fire suppression.

Luckily for us, there are a few places in the Houston area to find these birds. Look and listen for them at the Katy Prairie, Bear Creek Park, and Anahuac National Wildlife Refuge.