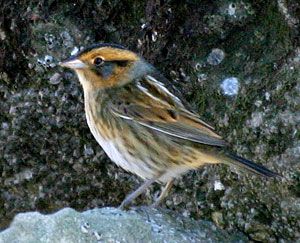 Profile by Richard Gibbons: The Nelson’s Sparrow is a small, stocky songbird with an orange face, gray crown, and well defined white belly. Its neck and upper body are brown with white or gray streaks, while its breast and flanks have smudged brown streaks. Its brown tail is short and rounded with pointed tail feathers. Males are slightly larger than females, but their plumage is the same.

Nelson’s Sparrows are secretive birds which are common in coastal salt marsh habitat. They breed inland in the freshwater marshes of the northern Great Plains, in coastal marshes on the Atlantic coast from Quebec to Maine, and along the southern edges of both Hudson and James Bays. They migrate in the autumn to their wintering grounds in coastal salt marshes from New Jersey to Texas. Before they depart for the breeding grounds in Spring, their frying-pan-sizzle song can be heard emanating from coastal marshes. More adventurous birders can walk through coastal marsh grasses and hope to flush a Nelson’s Sparrow. Their weak flight and crash landing back into the grass is typical of Ammodramus sparrows.

Until 1995, the Nelson’s Sparrow and the Saltmarsh Sparrow were thought to have been the same species, the Sharp-tailed Sparrow. While Nelson’s and Saltmarsh sparrows look very similar and have an overlapping breeding range in Maine, they are distinct genetically and can be identified in the field by song.