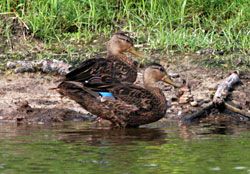 Profile by Bryce Loschen:  The Mottled Duck is a dabbling duck with a dark-brown body, a pale buffy head, and a dark cap. In flight Mottled Ducks have distinct white under-wings contrasting with their dark bodies. Males and females have similar appearance, but the males have a bright yellow bill with a black spot on the gape while the females have a duller yellow-orange bill with black spots. The Mottled Duck is similar in appearance to the closely related Mallard and American Black Duck. Mottled Ducks have blue-green iridescent wing patches rimmed with an all black or sometimes with a very narrow white band, while female Mallards have very distinct bold white bars edging the iridescent patch. American Black Ducks are very uncommon in Texas, but they are slightly darker overall than Mottled Ducks and have purple iridescent wing patches as opposed to the Mottled Duck’s blue-green.

Mottled Ducks are found in freshwater wetlands, ditches, wet prairies, rice fields, and seasonally flooded marshes. They prefer open habitats with no trees. Mottled Ducks are dabbling ducks which means they feed by dabbling with their bill at mud just below water's surface, occasionally by up-ending, as opposed to their diving duck relatives. Their preferred diet consists of seeds of grasses, aquatic vegetation, rice, aquatic invertebrates, and a few small fish. Unlike most waterfowl, Mottled Ducks are almost never seen in large flocks, generally traveling in pairs or small groups. Compared to other species of ducks, pair formation occurs early, with nearly 80% of all individuals paired by November. Breeding starts in January, continues through to July and usually peaks in March and April. Mottled Duck pairs build nests in dense marsh or prairie composed of shallow bowls of grasses and reeds lined with down and breast feathers.

Mottled Ducks have two separate populations, one along the Gulf Coast that ranges from Alabama well into Mexico, and another found in Florida and north into South Carolina. Unlike many other waterfowl, Mottled Ducks are non-migratory, so they can be found on the Texas Coast year round! Mottled Ducks are a species of conservation concern, with the North American Breeding Bird Survey showing a cumulative population decline of 79% since 1966. The main causes of the decline are loss of wetland habitat and hybridization between Mottled Ducks and Mallards, which are oftentimes released pets. Despite declines many Mottled Ducks are thriving in open freshwater wetlands on the Texas Coast so go out and see some yourself! 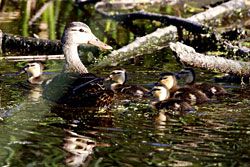