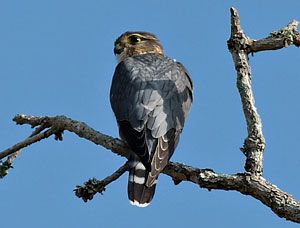 Profile by Glenn Olsen: Fall bird migration includes warblers, songbirds, and shorebirds, but the most spectacular is hawk migration. From early August to the end of October we have the greatest concentrations of hawks moving along our coast into Mexico, Central, and South America for the winter. Some also spend the winter in Texas. Peak time for most raptors is from mid-September to the first week of October. Naturally, I enjoy every raptor species, but seeing one feisty falcon always excites me, and that is the Merlin.

In North America we have three subspecies, and adults can often be separated in the field. Like the other true falcons, Merlins have pointed wings, stocky bodies and a fast, powerful flight pattern. The Merlins of the Pacific Northwest have dark brown to blackish backs. The Prairie birds have a pale gray back, and finally the Boreal or Taiga birds are most often blue-gray to dark gray on the back. The breast and flanks of each of these subspecies are generally off-white with light brown to dark brown streaking. On rare occasions we have the Prairie subspecies in our western regions. Most often we see the Taiga form. As with some other birds, there are intermediate plumages and the immature birds may not look like the adult birds.

Merlins are slightly larger and have a stockier body when compared to an American Kestrel. In addition, Kestrels have more pronounced black facial stripes and reddish-brown backs. Merlins are distinguished from Peregrines by their smaller size and different plumage pattern. Merlins breed in the forests of the northern U.S., Canada, and Alaska. They prefer open woodlands, fields with scattered groves of trees, and forest edges. Surprisingly, Merlins use the abandoned nests of other birds like crows, hawks, and ravens. They have been known to nest in tree cavities and on cliffs but this is rare.

Usually 4-5 eggs are laid, and it takes about 30 days for incubation. Merlins feed primarily on small birds but also take large insects like dragonflies and small mammals including bats.

In migration and winter they are found in similar habitat to their breeding habitat but are also found in coastal areas, grasslands, large parks, and marshes. While Merlins may be found anywhere in our area during migration and our winter months, one of the more reliable locations that I have found them has been Bear Creek Park which has open parkland with scattered trees and denser woodlands and forest edges. One year eleven were reported at this location. The best time to see a Merlin in our area is November to March.

Profile by Maria Hart: Merlins are a small, compact, and stocky member of the falcon family. They range in color depending on location and subspecies; however, the Prairie subspecies that is found in southern Texas is typically a lighter silver-grey color on top with a light underside streaked with reddish-brown. Both males and females have a thin white eyebrow stripe.

Merlins primarily breed in the northern portion of the United States. They nest in shrubs and small deciduous trees along semi-open areas such as riverbanks or windbreaks. Merlins do not actually construct their own nests and rely on the nests left behind by other species such as crows or hawks. During courtship, males have been known to perform magnificent flight displays, showing off their skills with strong glides while rolling from side to side followed by deep and dramatic dives.

A Merlin’s diet characteristically consists of small to medium sized birds, which they capture at high speeds in mid air! Merlins do this by attacking smaller birds, such as Horned Larks or sparrows, from below so that they are forced to fly upwards until they are tired enough to become easy targets for the much larger falcon. They are also known to feed on large insects and small mammals.

Merlin populations are currently stable and even appear to be increasing due to the decreased usage of pesticides. During the winter months, the Prairie subspecies of Merlin typically migrate to the southern and central region of the United States, as well as parts of northern Mexico. During migration and winter, they can often be found in grasslands, marshes, open forests, and coastal areas. So keep your eye out for one next time you visit any one of Houston Audubon’s sanctuaries! 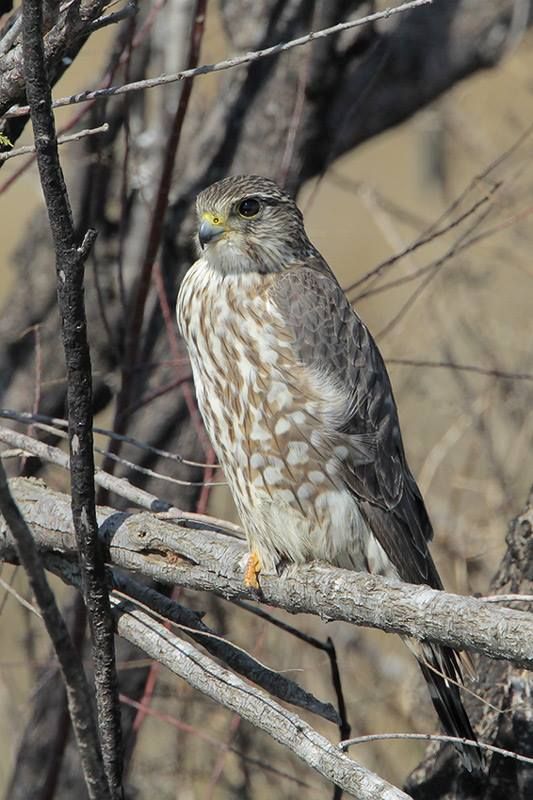 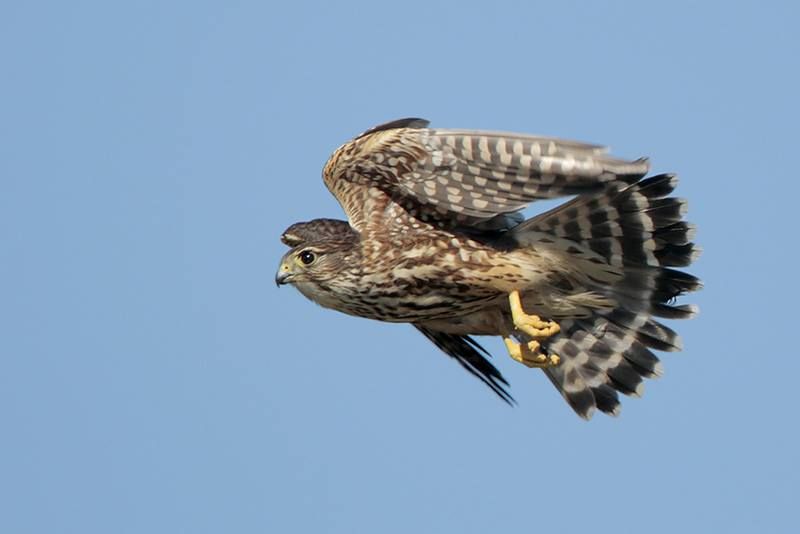 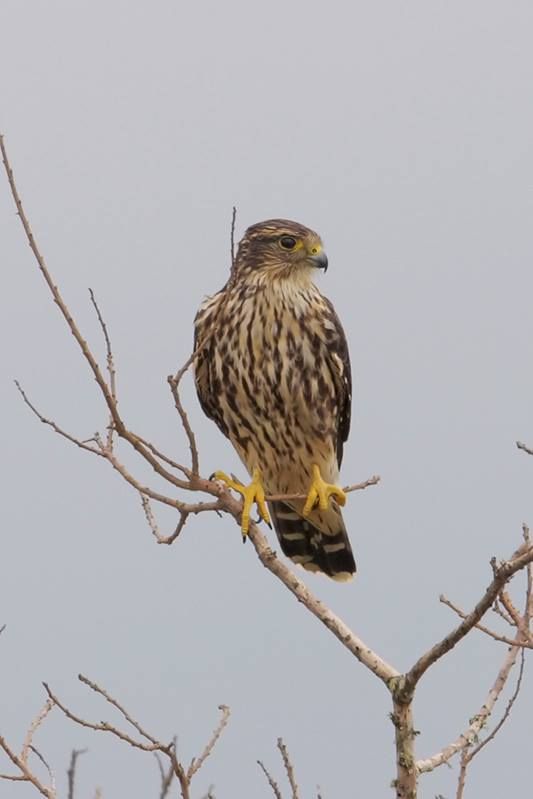