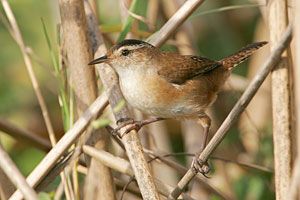 Notes: The Marsh Wren is a small brown bird that can be identified by its typical wren bill, whitish belly and eyebrow, distinct black triangle with white stripes on the back, and a solid brown crown. It will often sit with it's tail held upright, and is very active and vocal. If you are only able to catch a glimpse of this secretive bird as it darts between the reeds, it's song will clinch the ID. It sings throughout the day and night, a gurgling trill that ends with a mechanical sound like a sewing machine.

The Marsh Wren is found year-round in marshes along the coast in Texas, and throughout the state in the winter. During breeding season they are found in marshes of cattails and reeds with standing water. In the winter they expand to more marshes, including salt marshes and brushy edges of ponds. Check out the rookery at Smith Oaks Sanctuary at High Island if you want a sure thing, they'll be singing there throughout the winter. The Sedge Wren is similar but is paler with a striped crown, and their habitat does not normally overlap. It prefers sedge marshes and damp grassy meadows.

The Marsh Wren feeds on a variety of insects and spiders it finds on plants or on the surface of the water. When nesting, the male will make several "dummy" nests which a female may choose to use or create her own. The nest is secured to the cattails just a few inches above the water.