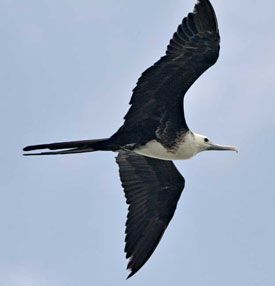 Profile by Vicki Stittleburg: With its huge size, long pointed wings, and long deeply forked tail, the Magnificent Frigatebird is instantly recognizable even at long distances. The bird has a 7.5 foot wingspan; relative to its body weight, the Magnificent Frigatebird has the largest wing surface area of any bird alive. Males and females look strikingly different; males have glossy, black plumage with an inflatable red throat patch and females have blackish brown plumage with a white breast. Juvenile birds resemble adult females but have a variable amount of white on their head and breast.

Magnificent Frigatebirds are common in the summer and are usually spotted close to the coast. Look for them soaring in the air at the Bolivar Ferry crossing or roosting on pilings in Galveston Bay.

Profile by Maria Hart: The Magnificent Frigatebird is rightfully named due to both appearance and behavior. With a wingspan of 7 to 8 feet and a profoundly forked tail used to steer, they can be seen effortlessly soaring above the open water of tropical oceans with a very seldom flap of their wings. Adult males are entirely black and can be seen with a red gular patch during the breeding season. Females and juveniles have more contrasting coloration as both have a white breast patch. Juveniles also have a white head as well as a light brown wingbar.

Magnificent Frigatebirds primarily forage for fish found within an inch or so of the ocean's surface. Some of their personal favorites include flying fish, tuna, and squid. From time to time, Frigatebirds have been known to pirate fish and other sea life from fellow birds by tormenting them until the unlucky seabird regurgitates their meal. The Magnificent Frigatebird will then delicately swoop down, catching this regurgitation before it hits the water.

During the breeding season, Magnificent Frigatebirds will take a break from their near constant flight to breed in dense colonies on offshore islands, coastal areas, and warm pelagic waters. Females build their nests in mangroves, in the upper canopy of deciduous trees, or in shrubs using sticks and twigs brought to her by the males.

For the most part, Magnificent Frigatebirds are relatively common. However populations have been declining in recent years. This is primarily due to coastal development of breeding habitat. In some areas, primarily in the Caribbean, this species has even been listed as “near-threatened.”

The Magnificent Frigatebird is typically seen over open water along the coast. This makes it a great time to visit Houston Audubon’s Bolivar Flats Shorebird Sanctuary. Keep your eye toward the sky next time you visit! 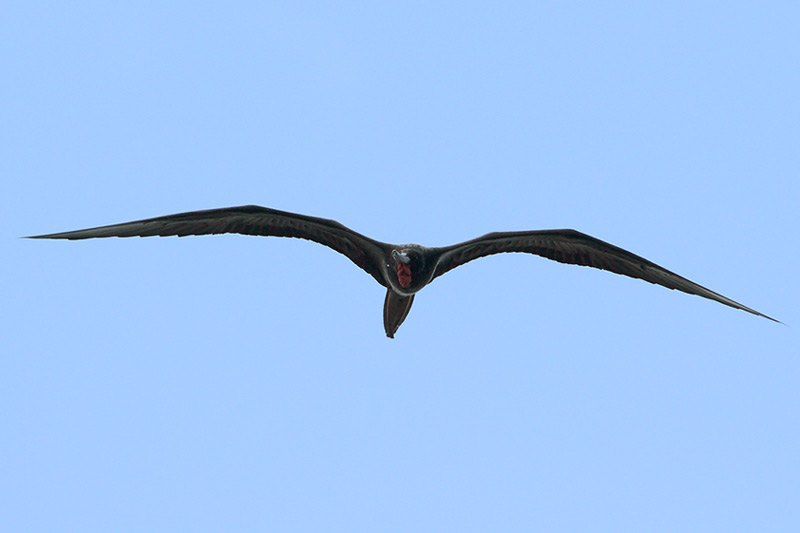 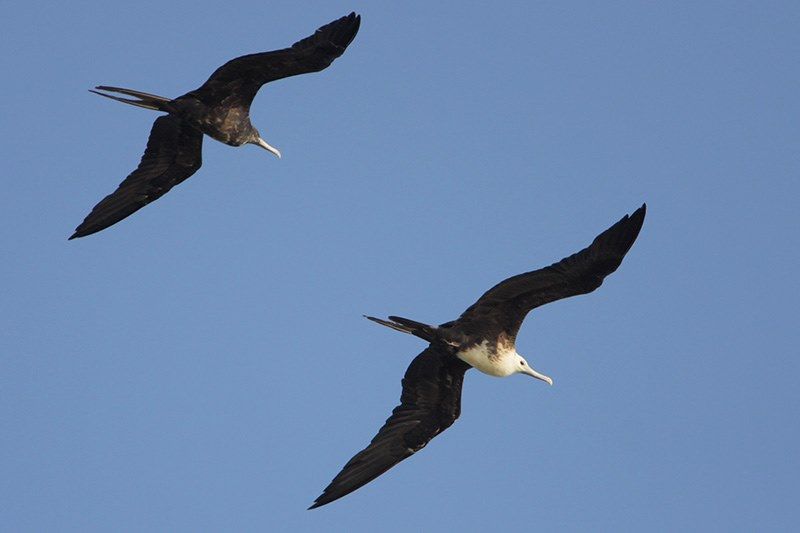 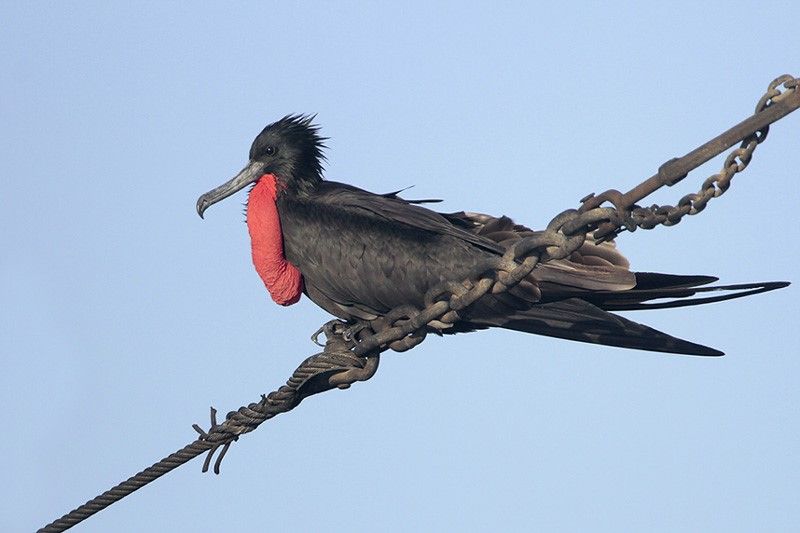 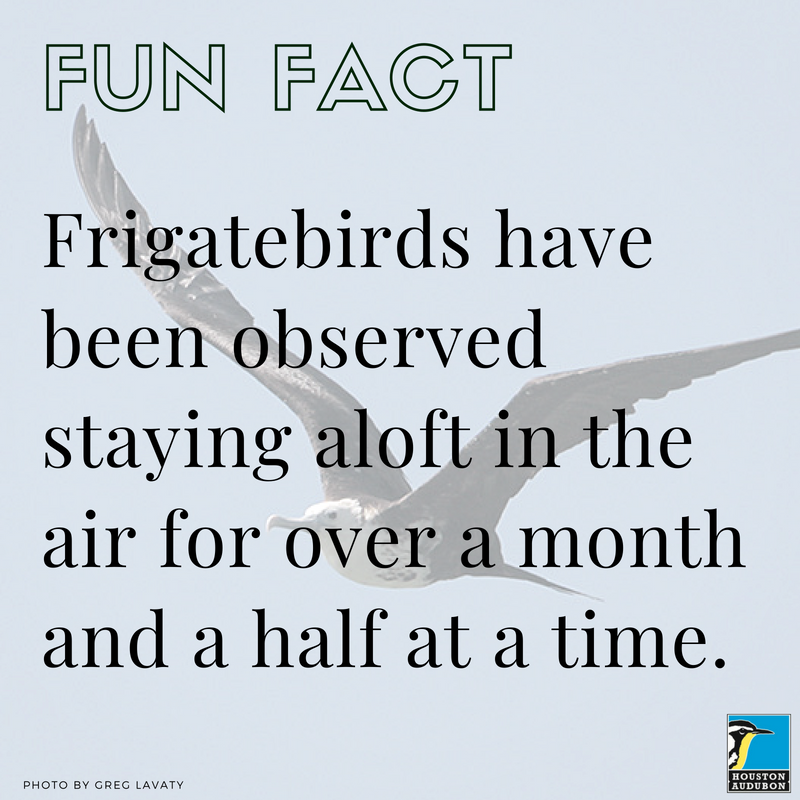 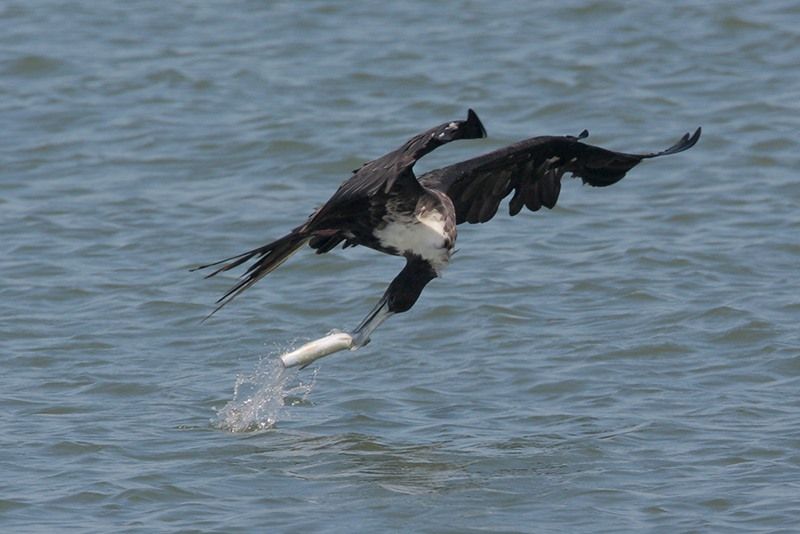 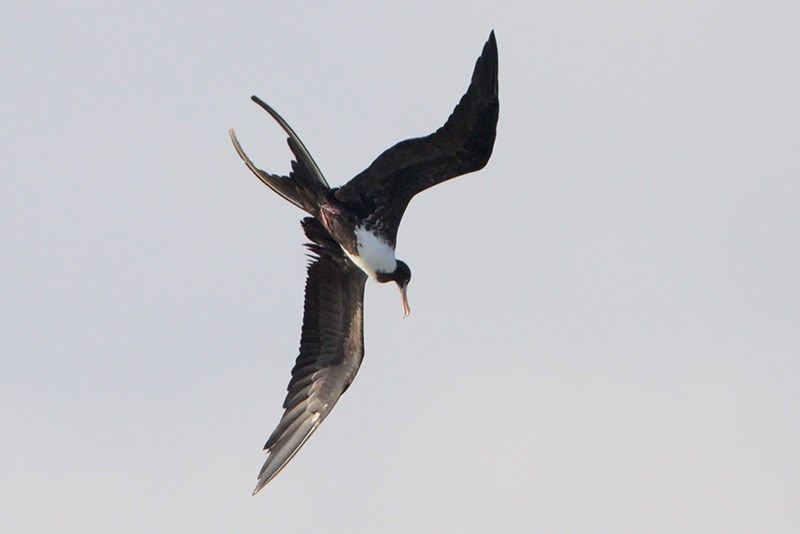