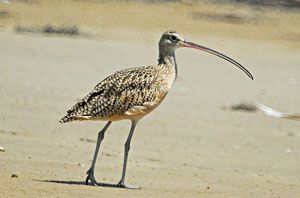 Profile by Gislaine Peters:  The Long-billed Curlew is the largest shorebird in North America. This speckled brown and buff colored bird’s most noticeable feature is it’s extremely long down-curved bill. Their bills can reach 8 inches or more and are dark in color and fade to flesh tones at the base. Their underwings are cinnamon in color and their legs and feet are bluish-gray.

The Long-billed Curlew spends the non-breeding months along the coast, but in summer they are found in the Great Plains and Great Basin in areas with sparse, short grasses, such as mixed-grass prairies and agricultural fields. Here they feed on mainly insects such as beetles, grasshoppers, and caterpillars. They will also eat spiders, toads, and berries.

On the breeding grounds, the Long-billed Curlew males will do an undulating flight display over his territory while giving a loud ringing call. Once he has a mate they will construct a nest in a shallow scrape in the ground. The pair will create a lining for the nest of about 8 inches across and 3 inches deep with pebbles, bark, animal droppings, grass, stems, twigs, and seeds. Their clutch averages 4 eggs and both adults will incubate until they hatch, approximately 27-30 days. The downy young leave the nest soon after hatching and can feed themselves. Both parents will guard the young as they forage in marshy or damp areas.

Long-billed Curlews migrate to the coast in winter and can be found in the southern United States as well as northern Mexico. During winter, they can be found in coastal prairies, wetlands, tidal estuaries, mudflats, flooded fields, and occasionally beaches. While in these coastal areas the Long-billed Curlew will also eat crabs, crayfish, mollusks, marine worms, and ghost shrimps. Long-Billed Curlew are seen along the coast of Texas as they either pass through or arrive for winter. If you visit the Bolivar Flats Shorebird Sanctuary there is a good chance you’ll find one foraging among the thousands of other shorebirds currently staging or wintering there!

Profile by Maria Hart: The Long-billed Curlew is the largest shorebird species in North America. They are unmistakable with their extraordinarily long, downward curved bill and large, football shaped body. Females have slightly longer and more deeply curved bills than those of the males. While in flight, look for their rusty wing patches and cinnamon colored underwings.

Long-billed Curlews inhabit both the shoreline and inland grasslands throughout the year. During the summer, they can be found in the western grasslands. Here, they forage for various insects including beetles and grasshoppers. They breed here as well, scraping small indentations into dry prairie lands. Long-billed Curlews prefer to nest in open areas although they have been known to place nests next to landmarks such as rocks or shrubs. This is most likely to provide both shade and protection to the nest and newly hatched chicks.

During migration and winter, the Long-billed Curlew is found on coastal mudflats of the southern United States and northern Mexico. They use their long bills to probe the sand looking for small crustaceans, shrimp, and marine worms.

Long-billed Curlews used to be much more abundant prior to the 1800s and it was not abnormal to see them foraging along the Atlantic Coast. Wild game hunting led to an abrupt decrease in population size. Modern day population loss has been recorded due to the conversion of grasslands to agriculture, eliminating large areas of crucial nesting habitat.

Long-billed Curlews are early migrants and have begun popping up over the last few weeks in June, 2019, on the Upper Texas Coast. Many sightings have been recorded at Houston Audubon’s Bolivar Flats Shorebird Sanctuary so be sure to check out the shoreline and mudflats next time you visit! 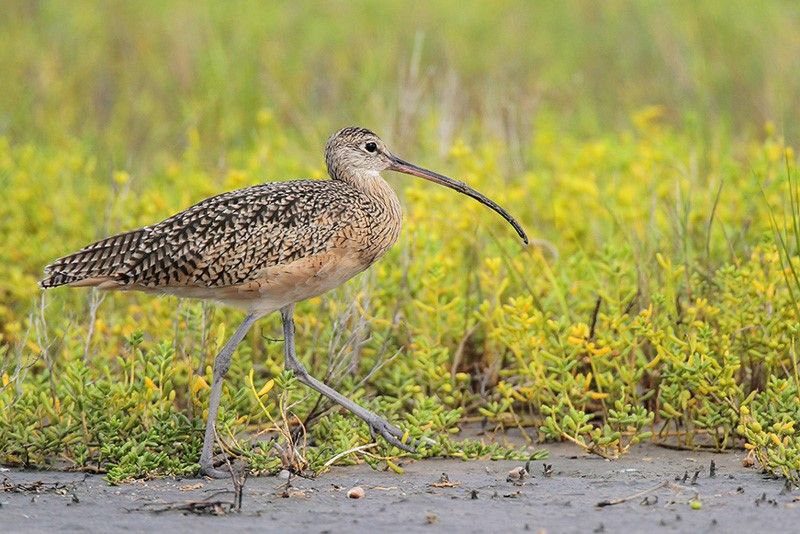 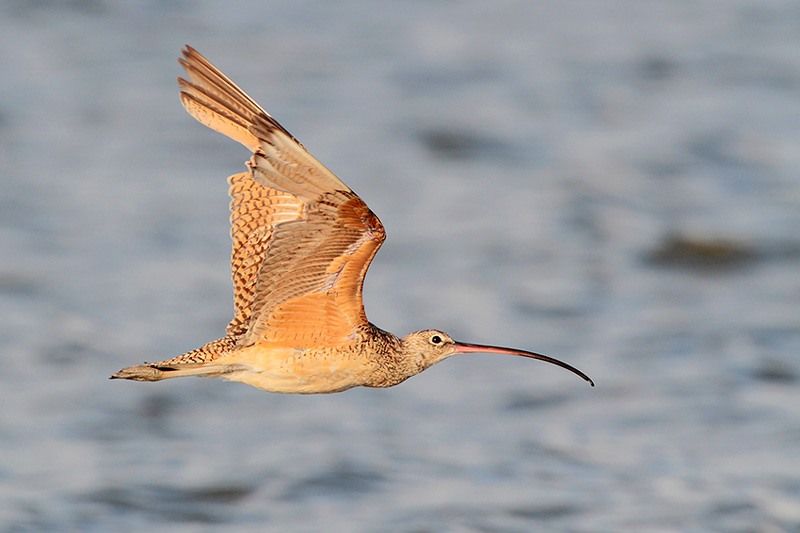 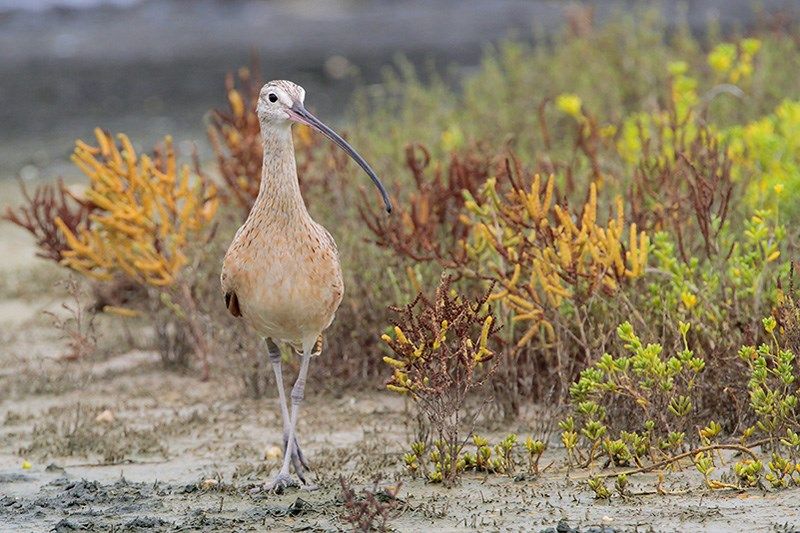