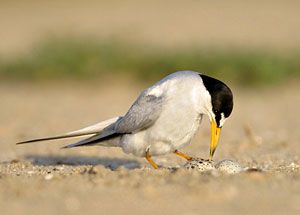 Notes by Kayla Ferron: The Least Tern is the smallest of all American terns. The wingspan is 48-53 centimeters and their sixe is between a robin and crow. They have a black cap ending at a white forehead and a short white eye stripe. It has a thin yellow bill with a black tip and yellow legs during the breeding season. They have a light gray back with a white underside. Juveniles have a barred looking back and yellow legs. Their habitat consists of seacoasts, beaches, bays, estuaries, lagoons, and lakes.

Least Terns eat fish, crustaceans, and insects. They are often seen flying low over the water with deep wingbeats. They will usually hover over the water, then it dives just below the water surface for its prey. They will occasionally fly down and take prey from the surface of water or land and catch insects in flight.

During courtship the male carries a fish and flies upward, the female follows, then both land on the ground. Once on the ground displays include courtship feeding. Least Terns usually nest in colonies on sandy beaches but have been known to use a flat gravel roof of a building. The nest is a shallow scrape, sometimes lined with pebbles, grass, or debris. Clutch size is usually 1-3 buff to pale green eggs with brown and black blotches. Incubation and feeding of the young is done by both parents. The young may remain with the parents for another 2-3 months after first flight occurs (19-20 days after hatching).

Populations of Least Terns are endangered in many areas due to human impacts on their nesting spots. Bolivar Flats is in their nesting range and they have been seen at the last few Shorebird Surveys! Come see if you can spot them!