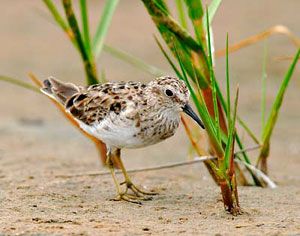 Seasonal Occurrence: Common spring and fall. Uncommon other times of the year.

Profile by Glenn Olsen: To begin to learn this group of sandpipers, I suggest spending time becoming intimately knowledgeable with the Least Sandpiper. Doing so will form your baseline or foundation for separating all the others.

The Least Sandpiper is the smallest shorebird in North America and tied with the Little Stint for the smallest in the world. This may not help much as the size difference between the Western and Semipalmated can be difficult to see at times. However, a quick first "field mark" to look for is the color of the legs. All of the peeps except the Least Sandpiper have dark-colored legs, usually black or nearly so, while the Least has light-colored legs, usually dull yellow-green to olive-green. However, if the bird is in the water, or has been wading in mud or algae, the color may not be easy to determine. So what to do? I look at body structure and behavior, not only for peeps, but for any bird species regardless of the family.

One needs to observe a sandpiper, paying close attention to the shape of the bill, head, and body as well as its behavior. Then it's possible to average out the different positions and appearances to arrive at a general understanding of the species. At any given instance or in a photo, a particular bird may be in a stance or body shape that is not "typical" of the normal position or body shape for the species and this could cause confusion or misidentification.

To get a more complete impression of the bird, observe it in the field, paying close attention to details while the bird is moving and changing positions. Once you have a solid foundation of what the Least Sandpiper really looks like while standing, walking, running, probing, etc., separating out the other peeps will be less troublesome. Notice, I did not say easy, only less troublesome.

In comparison to other peeps, Least Sandpipers have a slender body, small, rounded heads, and thin, fine pointed bills. Note the width or thickness of the base of the bill, the length of the bill relative to the width of the face, the thinness of the bill as it gradually tapers to a fine point. The bills of most (not all) of the Western and Semipalmated sandpipers will usually appear quite different, but only after you have already thoroughly studied the bill of the Least Sandpiper.