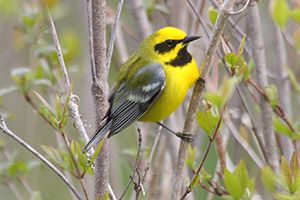 Profile by Glenn Olsen: If warblers are the jewels of North American songbirds, then the Lawrence's Warbler is one rare and beautiful gem. Not only is it rare in numbers of birds observed but also in terms of its origin. This bird does not rise to full species level but is a hybrid of two recognized species, the Golden-winged Warbler (Vermivora chrysoptera) and the Blue-winged Warbler (Vermivora cyanoptera).

Many if not most hybrids of birds are thought to be infertile. However, there is an established history of fertile hybrid offspring of the mating of the Golden-winged and Blue-winged Warblers. The offspring can take one of two stereotypical forms known as Brewster's Warbler and Lawrence's Warbler. There are a number of plumage variations between these two classic types. When first discovered, the Brewster's Warbler ("Vermivora Zeucobronchialis") and the Lawrence's Warbler ("Vermivora lawrencei") were considered new species. But around 1880, William Brewster concluded that these two were in fact hybrids between the Golden-winged and Blue-winged warblers.

The Brewster's is the more commonly occurring hybrid with dominant genes while the Lawrence's is rare due to the fact that the genes that produce the plumage pattern for this hybrid are recessive and their proper combination occurs infrequently. John T. Nichols of the American Museum of Natural History worked out the initial Mendelian model for the inheritance pattern for these hybrids which was later refined by Kenneth C. Parks.

Interestingly, recent DNA research indicates that "results from four classes of molecular markers indicate that Blue-winged Warblers and Golden-winged Warblers are surprisingly weakly differentiated and that far fewer genetically "pure" populations of Golden-wings may exist than previously assumed." (Molecular Ecology, 2007 ) To catch a glimpse of a Lawrence's Warbler during migration, plan on several trips to the Audubon Sanctuaries in High Island. Even then, seeing one is a matter of luck and good fortune. There are very few observed during migration. Your odds are best with Blue-winged Warblers. A few Golden-winged Warblers are also generally found at High Island each spring.