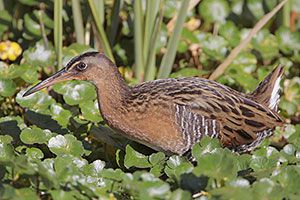 Profile by Bryce Loschen: The largest of the North American rails, the King Rail is a slender marsh bird, brownish in color with dark spots on the back, white bars on the flank, and a rust colored neck and breast. King Rails look very similar in appearance to the closely related Clapper Rail. Clapper Rails are a bit drabber overall, with a more grayish neck and breast, and with less streaking on the flanks, but the best way to distinguish them is habitat. King Rails prefer freshwater marshes, while Clapper Rails reside in saltwater marshes. Be careful though as both species can be present in brackish areas. King Rails can also be confused with Virginia Rails but Virginia Rails are smaller, with a rich cinnamon color and a distinct gray cheek patch.

King Rails are not as secretive as some other rails, and they can often be found stalking around the edges of marshes or rice fields looking for food. Their preferred diet consists primarily of crustaceans and aquatic insects, and occasionally small fish. In courtship mails will display their white undertail feathers, and bring food to prospective females. Pairs make nests of grasses, sedges, or rushes, about a foot above the water or ground. The nest includes a saucer-shaped depression, a canopy and a ramp. After breeding adult King Rails are flightless for nearly a month while molting.

King Rail winter range encompasses much of the Gulf Coast and the Eastern Seaboard of the United States. During breeding season some King Rail’s will move away from the coast into the interior of the country. King Rail populations are on the decline, and it is considered a species of high concern by the North American Waterbird Conservation Plan and is listed as near threatened by the IUCN. Most of the decline is attributed to loss of wetland habitat. Nonetheless, King Rails are locally common in many areas including the freshwater wetlands near the Texas coast where it can be found year round. With a little patience and a close eye and ear, you can find one of these birds prowling the edge of the marsh for yourself!