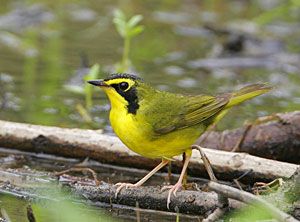 Profile by Glenn Olsen: The male Kentucky Warbler is a strikingly colorful bird with bright yellow underparts and eyebrow that curls behind the eye, a contrasting black crown, and area below the eye that is somewhat triangular in shape and soft olive green upper parts. This pattern produces a distinctive facial appearance that makes this bird one of the easier warblers to identify. The scientific name is derived from Latin and means a “fine appearance” or “handsome”. However, the female, while similar in appearance and color pattern, is not so bold and distinctive and may be more easily confused with other migrant warblers.

This Neotropical migrant is now returning to North America, where its breeding range includes east Texas and many other central and eastern states. Normally the preferred breeding sites are in moist bottomlands or ravines, and the nests are usually very near the ground.

Some of these birds will have spent the winter months as far as Venezuela and Columbia, while others have wintered in Mexico and Central America.

During breeding season, the Kentucky Warbler is a bird of deciduous forests, dense thickets, and luxuriant undergrowth, where it favors damp areas with ample leaves on the ground. The feeding strategy is to flip leaves over while looking for insects or to jump upwards to grab some insect in a low shrub. Most of the feeding habitat of this species is within three feet of the ground. During migration, Kentucky Warblers are most abundant in our area in April. So now is the time to get out and look under those tangles of brush and thickets to find this beautiful warbler.