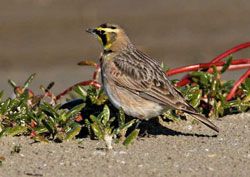 Seasonal Occurrence: Uncommon in all seasons.

Profile by Daniel Elting: The Horned Lark is small brown songbird with a long neck, rounded head, and upright posture. Males have distinct yellow faces with a black mask and two small head feathers that sometimes protrude upwards giving the “Horned” lark its namesake. Females are drabber and lack the mask but do contain some yellow wash and a brown breast band.

Horned Larks are ground-based birds; they forage on empty bare ground and occur in a variety of macrohabitats so long as there are patches of ground with little to no vegetation present. They are seen in grasslands, deserts, agricultural fields, tundra, beaches, and dunes. They primarily eat a variety of insects: grasshoppers, beetles, and caterpillars, but will occasionally also eat seeds.

Horned Larks nest on the ground, females usually find small natural depressions in the ground to start building but sometimes decide to make the depression themselves by kicking and scratching away at the ground which can take several days. Nest baskets are woven out of small pieces of plant material like rootlets, hairs, and twigs. Males will defend nesting territories by singing, their song is a quick high-pitched series of sharp “tinkling” notes. 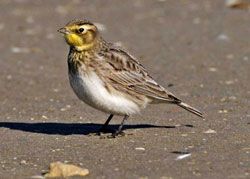