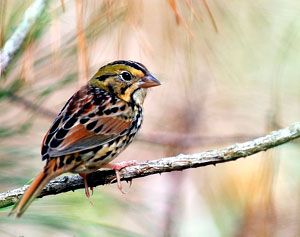 Notes: Henslow's Sparrow is considered to be a species in decline, primarily due to habitat loss. That and its secretive nature make it a challenging and prized sight on any birding trip. Henslow's Sparrow is more often heard than seen; its song is a short hiccup, tslick. David Sarkozi lists the best habitat for Henslow's Sparrow as "wet shrubby fields, weedy meadows, and open pine woods". Brazoria NWR, the Katy Prairie, Jones State Forest and Anahuac NWR are all productive areas. This fine photo was taken at Lake Houston State Park in December, 2006. It clearly shows the distinctive facial pattern and flattened head appearance. Houston formerly had an isolated breeding population which was considered by some to be a separate subspecies (Ammodrammus henslowii houstonensis). This population disappeared in the 1980's because of devegetation of its habitat, which was caused by industrial development. Henslow's Sparrow is on the Audubon WatchList.
- Susan Billetdeaux