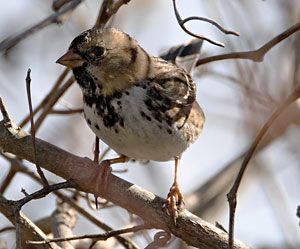 Profile by Glenn Olsen: The presence of more species of sparrows is one of the reasons that I enjoy birding the winter months as much, if not more than, the spring migration months. Twenty–four species of Emberizidae have been recorded on the Upper Texas Coast, and winter months are a great time to see them. Wintering sparrows begin arriving about mid-October to early November, and some remain until early April. Of these, the Harris's Sparrow is one of my many favorites. At about 7 to 7.5 inches long with a wingspan of about 10 inches, it is also one of our largest sparrows. One of the aspects of sparrow identification that make them fun and challenging is that many of them look so similar – generally brownish with streaking. However, an adult plumaged Harris's Sparrow is quite distinctive with a usually black crown, chin, and bib, and contrasting whitish breast and belly. The extent of black varies from very little and faint to quite prominent and extensive. The pinkish bill is also quite distinctive. The back, tail, and upper parts are generally brownish with some blackish markings. This color pattern is unlike any other sparrow that we are likely to see in our area. First winter birds lack the extensive black of adults and have a white chin and throat with a dark brownish 'necklace' across the upper breast. The upperparts are similar to the adult pattern.

This species breeds in the stunted spruce and reindeer moss of the far northern regions of Canada and winters primarily in states of the central U.S. However, the winter range extends to areas both east and west of this usual range. The common name derives from Edward Harris (1799-1863) a benefactor of John J. Audubon. The scientific species of querula was given by Thomas Nuttall who was the first to collect the bird for science in 1834.

On its winter range, one can find Harris's Sparrow around woodland edges, brushy fence lines, brush piles, or thickets. The Katy Prairie area is one of the best places close to Houston to see these beautiful winter visitors. Participating in a Christmas Bird count is a great opportunity to be with other birders and see this uncommonly attractive species.