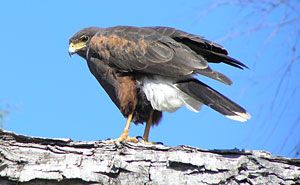 Seasonal Occurrence: Rare August through May.

Notes: The Harris’s Hawk is a large raptor native to North America's arid Southwest. It has a dark brown body, cinnamon colored patches on its shoulders, and bright yellow coloration behind its bill and on its legs. When in flight, this bird has a very visible white rump similar to Northern Harrier. Harris’s Hawks are well-known for their gregariousness and cooperation with others of their species. It is typical to see a group of five to six Harris’s Hawks working as a team to catch prey; usually a few birds flush the prey while one or two catch it.

Harris’s Hawks nesting is generally very social as well. They will nest in social units that can have up to seven individuals in a small area. They nest in tall plants or other structures found in the desert they inhabit. Nests of this species have been found in trees, cliffs, saguaro cactus, as well as several man-made structures such as windmills or cell towers. Nests are typically bulky and comprised of thick sticks and pieces of other plants.
- Richard Gibbons