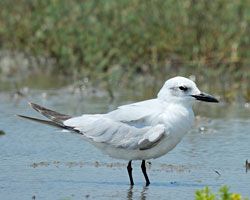 Seasonal Occurrence: Uncommon spring through fall; occasional in winter. Breeds in our area

Notes: The Gull-billed Tern is a medium-sized tern and sometimes thought of as “the most un-tern-like tern” because of its thick stout black bill that more resembles the bill of a gull than a tern. Compared to other terns, this tern had a stocky physique and wide wings. They have a black cap that extends to its nape, black legs, and has a pale gray body. Juveniles can look similar to adults, but they will have brown bills and sometimes buff plumage. These terns are usually found along the coast, especially mudflats and salt marshes. It is this proclivity that inspired it's penultimate name, Marsh Tern. Another distinguishable trait are its feeding habits. While most terns fly over the water in search of fish, the Gull-billed Terns prefers to hunt over mudflats and marshland looking for insects, fish, amphibians, crustaceans and sometimes other birds eggs! Gull-billed Terns can also be spotted Hawking which is a feeding strategy where a bird will sally from a perch into the air to catch an insect mid-flight.

Although the Gull-billed Tern is considered a resident of Texas it’s not commonly seen fall through early spring. Gull-billeds form breeding colonies on low lying bay islands safe from terrestrial predators and winters in Central America to South America. 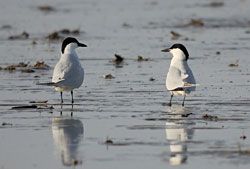