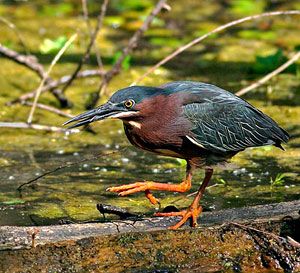 Profile by Steven Garcia: The Green Heron is an incredibly distinctive member of the North American heron tribe. Small and stocky, the Green Heron measures 16.1-18.1 inches in length, 8.5 oz in weight, and a wingspan of 25.2-26.8 inches. This little heron is the second smallest Heron species in the United States, bested by the equally interesting Least Bittern.

The Green Heron has distinctive field marks such as a dark rufous chest and neck, deep green back, and bright orange legs. Juveniles have a muted appearance, being browner overall with pale streaking on the neck and speckling on the wings. A resident to medium-range migrant, the Green Heron will reside along the Texas coast year round, with east Texas lands generally occupied by populations during the breeding season (spring-summer), south west Texas occupied during the non-breeding season (fall-winter), and northwest Texas visited by migrating individuals.

The Green Heron takes advantage of their small size by hunting in small freshwater wetlands, ponds, and stream-sides with thick vegetation at their margins, ensuring ample cover for their safety and stealth. This solitary and secretive Heron likes to stand motionless by the edge of the water, posed horizontally with body lowered. It waits to thrust its bill at any unsuspecting prey swimming by. Although fish make up a majority of the unsuspecting prey, the Green Heron is not picky, using crustaceans, aquatic insects, amphibians, snakes, and rodents as food sources when the opportunity arises.

As one of the few bird species to use tools, the Green Heron will attract curious prey with different forms of bait such as twigs, feathers, insects, or leaves. Despite the fact that the Green Heron prefers the stop-and-wait hunting strategy, they occasionally dive for deep-water prey, aided by the webbing between their middle and outer toes. 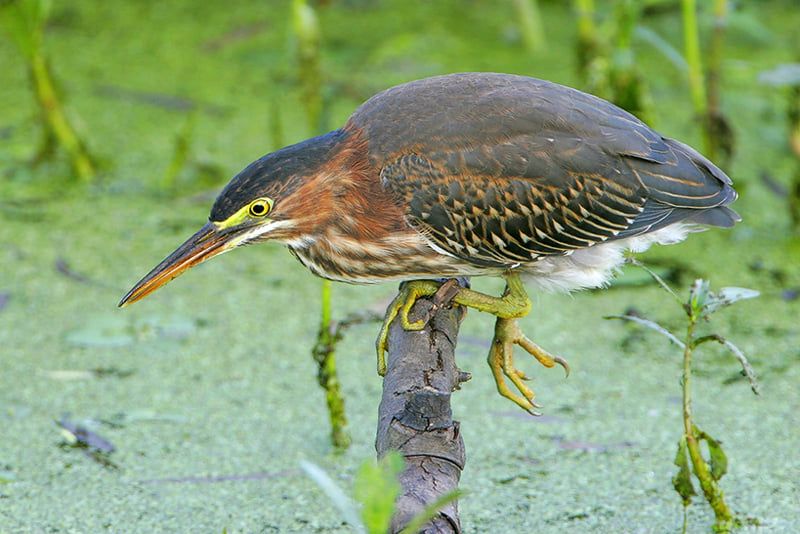 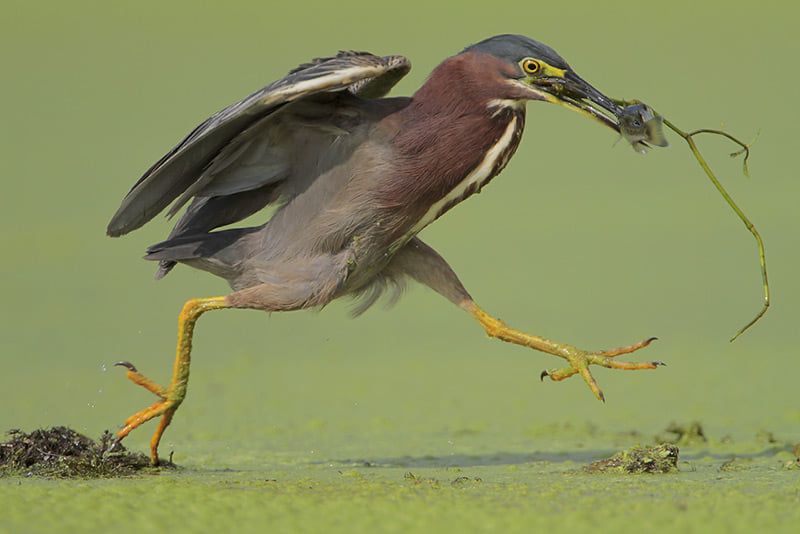 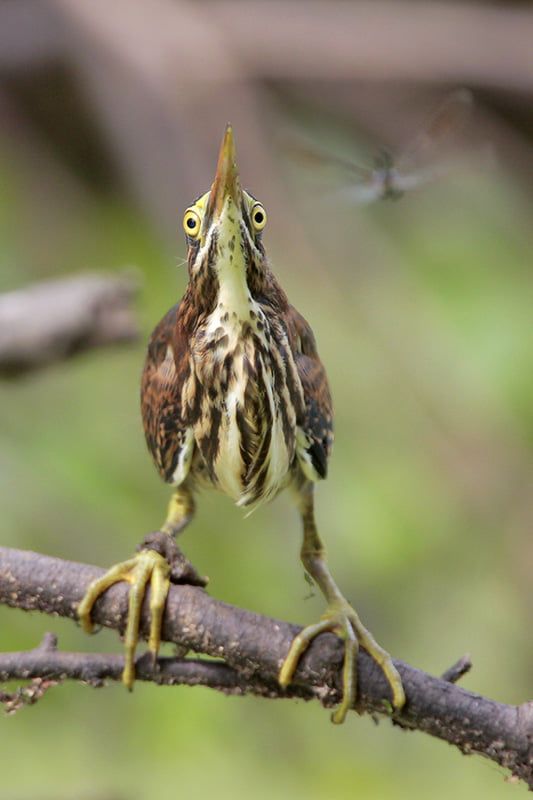 Profile by Aidan Healey: What do you mean, I’m short?

The Green Heron is one of the smallest resident members of the heron family in the Houston area. Full-size Green Herons are approximately 18 inches (45 cm) from beak to tail, which means they are comparable in size to the familiar American Crow. Additionally, Green Herons often hold their necks tucked in, which gives them a crouched appearance and makes them appear even shorter at first glance.

Green Herons have dark greenish-gray bodies and deep reddish-brown necks and faces, with dark greenish feather tufts on top of their heads. Adult birds have bright yellow legs, which turn more strikingly orange during the summer breeding season. Young Green Herons are generally lighter colored than adults, and they can be easily identified by the whitish streaking on the front side of their necks.

Green Herons can be found in forested wetlands and marshy areas with dense vegetation. They are usually solitary; though young birds often follow their parents for a few weeks after they fledge from their nests. When feeding, Green Herons will perch rather horizontally above the water, ready to strike at fish that swim within reach. While fish are their primary prey, they will feed on crayfish, frogs, snakes, and insects as well. 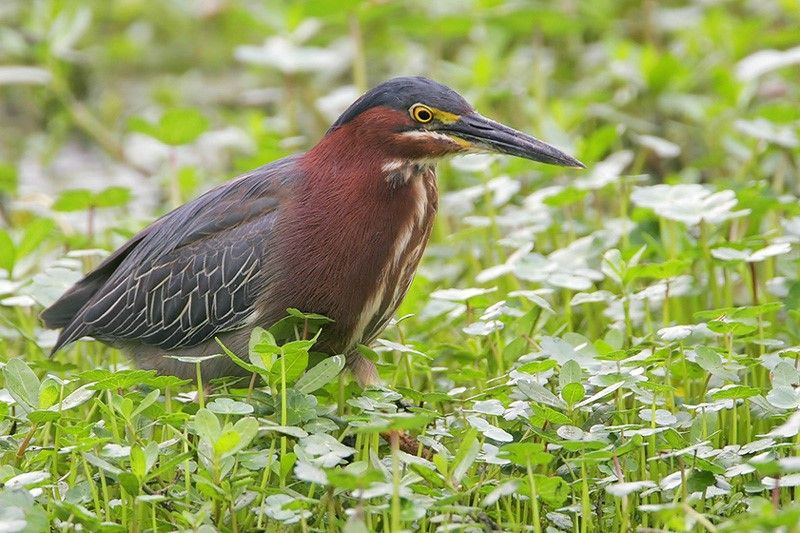 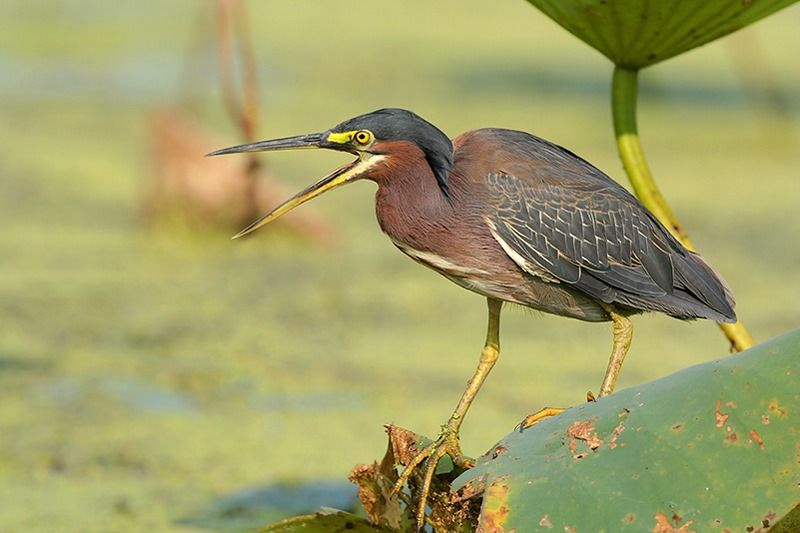 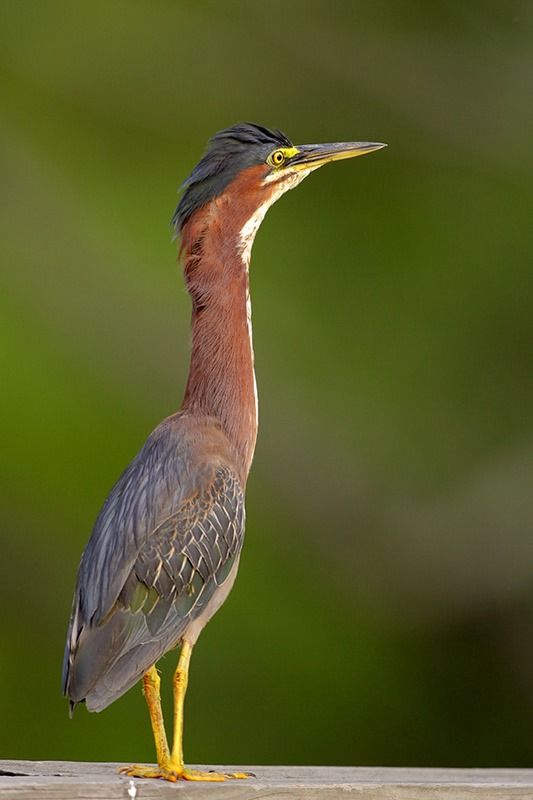