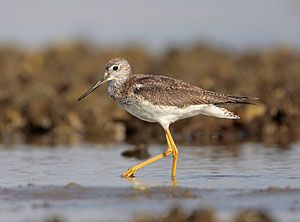 Notes by Kayla Ferron:  The Greater Yellowlegs is a medium-sized to large shorebird with long yellow legs. They have a long neck and bill as well as a white rump. Their habitat includes marshes, mudflats, streams and ponds. They have a loud, piercing alarm call that they use to announce themselves. Although they are common and widespread, their tendency to breed in inhospitable and mosquito ridden areas make them one of the least studied shorebirds in North America.

Greater Yellowlegs feed mostly on insects and small fish. During the breeding season, they usually eat insects and their larvae. In migration and winter they eat small fish such as killifish and minnows. Occasionally the Greater Yellowlegs will feed on crustaceans, snails, tadpoles, marine worms, and sometimes berries. They actively forage in shallow water sometimes running after minnows. They will also forage by walking forward while swinging its head back and forth while it has the tip of its bill in the water.

Greater Yellowlegs usually have a clutch size of 4 eggs that appear blotchy with gray and dark brown colors. Soon after hatching the chicks are able to least the nest. Both parents tend to the young and if danger comes near them, they protest loudly with attacks or distraction displays. The parents do not give the young food; the young Greater Yellowlegs must find it themselves.

Come see if you can spot some Greater Yellowlegs at the Bolivar Flats Sanctuary!