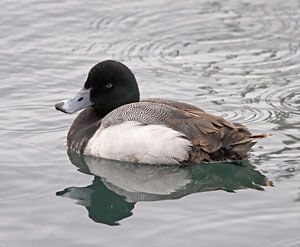 Notes: Greater Scaups are only infrequently seen on the Upper Texas Coast and can be easily confused with the much more common Lesser Scaup. Compared with Lesser Scaups, their heads are more rounded, they have conspicuous white in their primary wing feathers, and they have a relatively large "nail" on bill tip. Female Greater Scaups have soft brown plumage with a white patch at the base of the bill. Scaups are placed in the group of diving ducks, since they obtain food by diving and swimming underwater. They are seldom found outside the water and need a running start to take flight. Like Lesser Scaup, Greater Scaup numbers have been declining in recent years. Both species are being studied to understand the causes and how to reverse the trend.
- Susan Billetdeaux