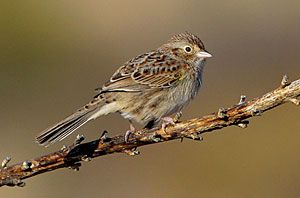 Notes: The Grasshopper Sparrow gets its name from its insect-like buzz and because of its fondness for grasshoppers. A skulker of dry fields it is hard to find and even harder to photograph. In our area it is primarily a winter resident, however, it nests in the spring on the Edward's Plateau. There are several subspecies, including a distinctive Florida subspecies which is listed federally as endangered. The Grasshopper Sparrow has been listed by the National Audubon Society as #10 on its Common Birds in Decline list. It reports that numbers are down 65% since 1967. Better management of grasslands and farmlands would greatly help this species.
- Susan Billetdeaux