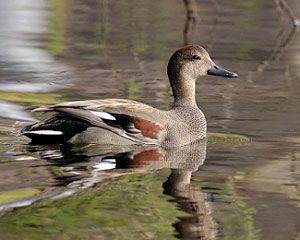 Seasonal Occurrence: Abundant November through April. On the coast, uncommon in winter and occasional in fall.

Profile by Richard Gibbons: The Gadwall is a common and widespread species of duck found throughout North America. Gadwall males are typically much drabber than most other species of duck, but nonetheless they are fairly easy to distinguish from other species. Gadwall are relatively large ducks, the males have an overall sleek gray-brown coloration with a noticeable black patch near the tail. The females are drab brown with square heads and a thin orange edge to their dark bills. In flight both sexes have a white belly and a noticeable white wing patch.

The Gadwall is a dabbling duck, meaning it forages on the water by tilting forward and feeding on submerged vegetation without ever actually diving below the surface. Gadwall are known to be occasional thieves, stealing food from nearby flocks of other ducks or American Coots. Although Gadwall are primarily herbivores, small invertebrates make up a significant portion of their diet during their energy-demanding breeding season.

Gadwall breed in the Great Plains of the northern United States and southern Canada. They place their nests in dense brush or grasses where it is well concealed; it is rare to have a Gadwall nest more than 200 yards away from a large water body. Although Gadwall breed in the summer like most ducks, it is common to see them with their mates during the winter; Gadwall often have already chosen their summer breeding mate by the end of fall.

Gadwall as well as many other species of duck winter in southern United States and that includes all of Texas. Gadwall are common and conspicuous on any body of water that has sufficient vegetation for them to feed on. Come to our sanctuaries and check around our ponds and see if you can find some Gadwall, or keep an eye out for large migrating flocks above. 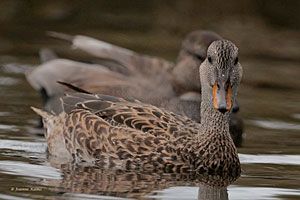