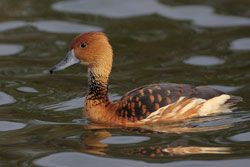 Profile by Azure Bevington:  The Fulvous Whistling-Duck is widespread throughout the world, but has a limited distribution in the United States, where they are found mainly in the southeast. There is a year round population in central Florida and a western Gulf of Mexico population with a summer breeding range along the coast in Texas and Louisiana.

They can be found in freshwater ponds and impoundments, particularly rice fields. They often nest in or near rice fields, where the male helps take care of the offspring. Mated pairs stay bonded for many years.
Fulvous Whistling-Ducks, named for the two syllable whistling “kit-tee” sound they make, are medium sized ducks with a long neck and legs; they are clearly smaller than the Black-bellied Whistling-Duck. Head, neck, chest and underside are a tawny cinnamon brown color with a darker back, dark wings, bill and legs, and a white band on upper tail coverts. Juveniles are similar to adults.

They are distinctive in flight, with stiff heavy wingbeats. Fulvous Whistling-Ducks keep their wings distinctly cupped through the wingbeat similar to geese. They often form large flocks with messy lines trailing behind the main clump. During migration, especially in spring, migrating flocks are often seen flying parallel to the coastline in the northwestern Gulf of Mexico. These flocks can be seen from shore along the beaches of the Bolivar Peninsula in Texas, and have already been reported this year. So hurry up and get out there and try to look for them at Houston Audubon Society’s Bolivar Flats Bird Sanctuary! 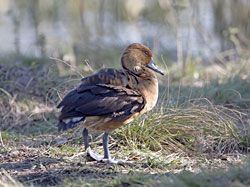 Profile by Aidan Healey: The Fulvous Whistling-Duck can generally be found visiting the Houston area during the summer breeding season. They visit our area while most species of North American waterfowl are breeding further north, taking up residence in marshy ponds, irrigated fields, and coastal wetlands. While their regular migration may be rather well understood, seemingly errant flocks of Fulvous Whistling-Ducks have been known to stray hundreds of miles from their usual range, showing up in places as far as the Dakotas, Canada and Hawaii. These wandering flocks may stay for only a few days, or they may remain in their new home long enough to breed and establish a new local population.

Fulvous Whistling-Ducks have long necks and long legs, which give them a different overall shape from many other North American waterfowl, especially when standing or walking on land. They are warm brown overall, with a darker brown back and wings. When seen in flight from below, their dark wings contrast against their light buff-colored body, giving them a multi-colored appearance. They usually travel in small flocks, which can often be detected by the near-constant whistling calls these ducks give in flight. 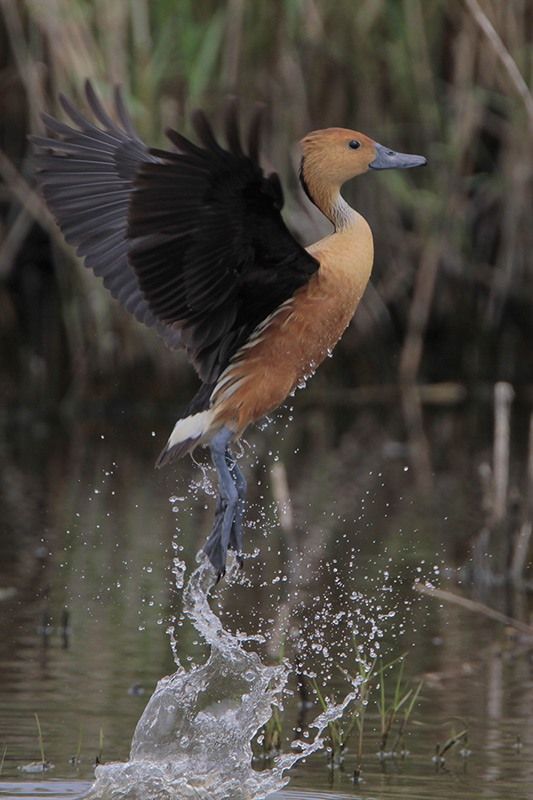 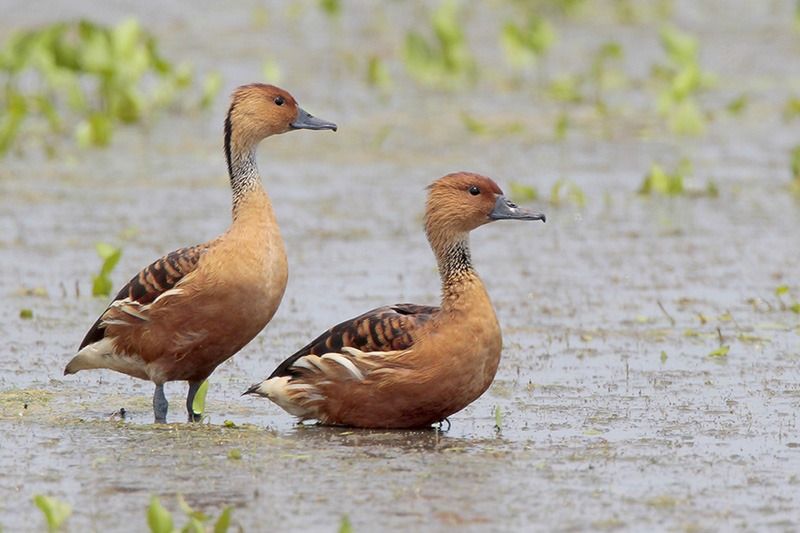 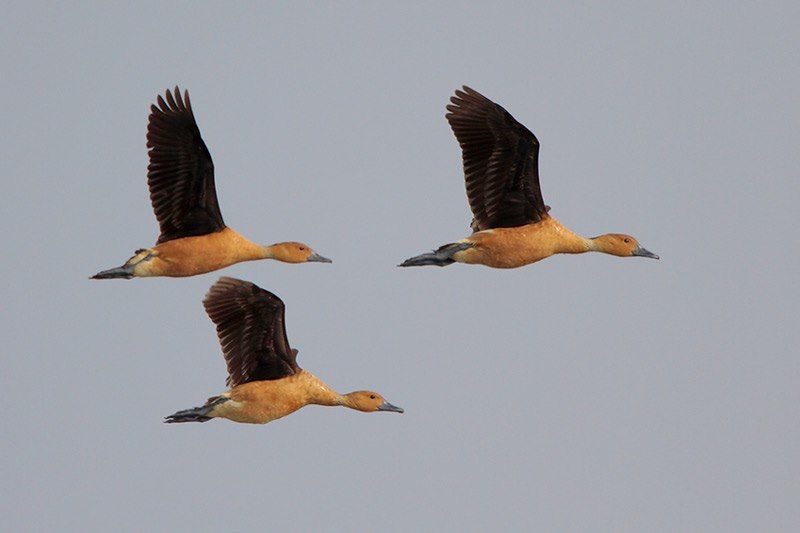