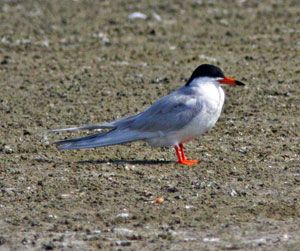 Notes:  The Forster’s Tern is a medium sized tern, at about 13 inches in length. They are commonly found over open shallow water and in salt and fresh marshes throughout the United States, Mexico and Southern Canada. During summer they breed mainly around marshes, either coastal salt marshes or large marshy lakes in the Great Plains. They winter mostly along the southern coast, especially around estuaries, inlets, coastal lagoons, and sheltered bays.

Forster’s Terns are primarily white with very pale gray on the upper wings and an all black cap and orange bill with black tip in breeding plumage. In non-breeding plumage, they have a darker bill and white crown with an isolated black eye patch. Their short legs are orange throughout the year, but can often be difficult to see at a distance. They have long deeply forked tails, which often extend past their wing tips. Forster’s Terns are similar in size and appearance to Common Terns but are slightly bulkier and broader winged, in the winter they can be distinguished by the eye patch, as the Common Tern has a partial black cap and black legs.

They tend to nest in small colonies on vegetated islands in shallow bodies of water and marshes, typically laying three eggs. They like to nest in higher drier sites within wetlands and have been known to nest on top of muskrat houses.
Forster’s Terns eat mainly fish, but will also consume insects while nesting in marshes during the summer. They are very common along the upper Texas coast and can be seen flying by, foraging, and loafing along the beach at the Bolivar Flats Sanctuary, come down and see for yourself! 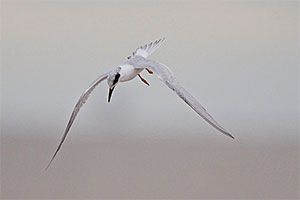