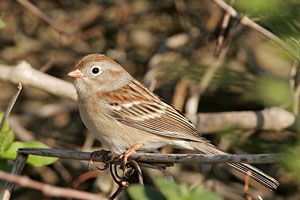 Profile by Glenn Olsen: While many sparrows are challenging to identify, the Field Sparrow has such a distinctive "baby-face" appearance that it is actually fairly easy to identify once you recognize the look. The pale gray face, cinnamon crown, pinkish bill, and a prominent whitish eye ring that makes the eye really stand out gives me the impression of a sweet, baby face. No other sparrow has this facial impression for me.

This adorable sparrow is uncommon to rare in our area. The breeding range is most of the eastern half of the U.S. but north of the Gulf shoreline; consequently it is only here during our winter months. Generally I see one a few times per winter season. Good places to look for this cutie are in grassy fields, hedges, roadsides with grass, and woodland openings and edges. During the winter, their diet consists mainly of seeds, and I often find them in woodland openings and edges where little bluestem grass is growing since they eat the seeds.

In their breeding grounds, I have enjoyed the distinctive song of the male. It is usually characterized as an extended whistle or series of short whistles, accelerating and concluding in a rapid series of very short whistles. It has the cadence of a ball dropped on a hard surface and bouncing to a stop. Once your learn the sound and cadence you are not likely to confuse it with another sparrow.