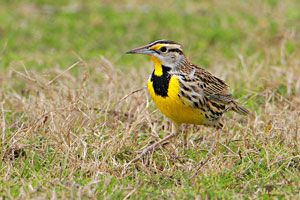 Seasonal Occurrence: Common in all seasons. Breeds in our area.

Profile by Richard Gibbons: The Eastern Meadowlark is a stocky songbird with a bright yellow throat and breast with a prominent black ‘V’ on the front, brown streaks along their sides, and white outer tail feathers. They are a year-round Texas resident and are often spotted singing on an exposed perch, like a fence post.

They prefer open, grassy habitats such as a meadow, pasture, or prairie. They are ground nesters, often in farmlands and fields.

You can readily find Eastern Meadowlarks in most of our sanctuaries with any significant grassland habitat, but Bolivar Flats is an especially good place to hear and see them, where the beach transitions to wetland. In these grassy areas they forage on the ground for seeds and insects. In winter and migration you may see them foraging in a flock of up to a dozen birds.

Profile by Glenn Olsen: Ask someone what bird they associate with a prairie or grassland and you will probably receive many different responses because so many birds depend on this ecosystem at some time in their lives. Some are resident grassland birds, others may winter in grasslands, and others depend on them during migration. Of the many species of birds that are associated with grasslands in our area, the Eastern Meadowlark is the one that can most frequently be observed throughout the year. In the winter months one may also find Western Meadowlarks in grasslands or agricultural fields outside of Houston. The Western Meadowlark (Sturnella neglecta) looks almost identical to its eastern cousin so it takes a practiced eye to separate the two. They are more easily separated by vocalization.

Grasslands or prairies are one of the most endangered ecosystems in North America. Many people do not realize how critically important grasslands are for many species of birds as well as insects, mammals, amphibians and reptiles. Although not possessing many trees, the prairie teems with abundance and diversity in plants, insects, and birds. Originally our prairies were a web of life consisting of an amazing diversity of grasses and wildflowers that supported the bison, deer, the birds, and insects among numerous other species. While we have almost no original prairie ecosystems remaining, the ranchlands and farmlands that now occupy part of the original Katy Prairie do offer an opportunity to observe birds, plants and insects associated with grassland habitat. The protection of this land is critically important to many species of birds. The Katy Prairie may at times be flooded and alive with frogs, insects, herons, egrets, ducks, and many other species. Yet at other times it may be drier and still supporting an abundance of wildlife for those willing to look. Various species of flowers are in colorful bloom throughout the year, and with a practiced eye one notices that the grasses change color with the seasons, so that the palette of the prairie is never the same.

A very few examples to illustrate the diversity of birds that occur in our grassland area at various times of the year include Canada, Snow, and Greater White-fronted Geese, numerous species of ducks, Vermilion Flycatcher, Buff-breasted and Upland Sandpipers, American Golden Plover, six species of swallows, Crested Caracara, Peregrine Falcon, Swainson's and White-tailed Hawks, Northern Bobwhite, Loggerhead Shrike, Short-eared Owl, Sandhill Crane, and many species of sparrows. This is a very small sampling, but it illustrates the value of grasslands to a wide range of birds.

The Meadowlark is synonymous with grasslands. The name “meadowlark” is derived from the bird's habitat of meadows (grasslands) and lark from its melodious song. It is not a true lark but is, in fact, a member of the blackbird and oriole family. The Eastern Meadowlark in spring or summer may frequently be seen perched on a fencepost belting out its musical song. When observed like this, the brilliant yellow underparts with a black “v” on the breast glow in the sun light. The upperparts are mottled in various shades of pale gray-brown colors which provide excellent camouflage once on the ground. In flight the bird appears short tailed with white outer tail feathers, has a plump body, rapid wing beats and short glide periods. The head and bill give a distinctive sharply pointed appearance.

Meadowlarks forage and nest on the ground. They walk and look for insects which constitute the bulk of its diet. Meadowlarks nest locally, and the nest is constructed on the ground of interwoven grasses and may be interwoven with a clump of growing grass. Frequently, grass above the nest is interlaced with other grass to form a dome shaped roof above the nest. While still fairly common, the population of the Eastern Meadowlark has declined 72% in the last 40 years due to the loss of grasslands to development (source: National Audubon Society). I encourage you to get out in the early morning and listen to the musical song of this quintessential grassland bird, and then you will understand why we need to protect our grasslands and prairies.

Profile by Maria Hart: The Eastern Meadowlark’s bright song is a familiar sound throughout open grasslands of eastern North America. They are commonly seen singing from fence posts, telephone wires, and shrubs. Eastern Meadowlarks can easily be identified by their brilliant yellow chests and dark v-shaped collar. These colors are slightly duller in the winter yet still distinguishable. They have heavy brown and black streaking on their backs, a long, sharp bill and, a white mustache. Aside from differences in song, this mustache coloration helps to differentiate the Eastern species from the similar Western Meadowlark species, as they have a yellow mustache.

Eastern Meadowlarks forage for food by walking on the ground through grass while probing for an assortment of insects including grubs, grasshoppers, caterpillars, and crickets. They also feed on seeds during the winter and spring months if insects are more scarce.

When it is time to breed, female Eastern Meadowlarks intricately swirl and weave dead grasses together to form a nest hidden on the ground within dense vegetation. These well thought out nests often have tunnel systems to help conceal both the mother and the chicks as they come and go. The males will often have two mates at a time and will defend their nesting territory by singing from an elevated perch.

Disappearing prairie and grassland habitats have led to a noticeable decline in the Eastern Meadowlark population. In 2014, they were listed as a “Common Bird in Steep Decline.” Eastern Meadowlarks are still frequently seen and heard in the tall grasses of the Bolivar Flats Shorebird Sanctuary though, so be sure to take a look into the marsh next time you visit! 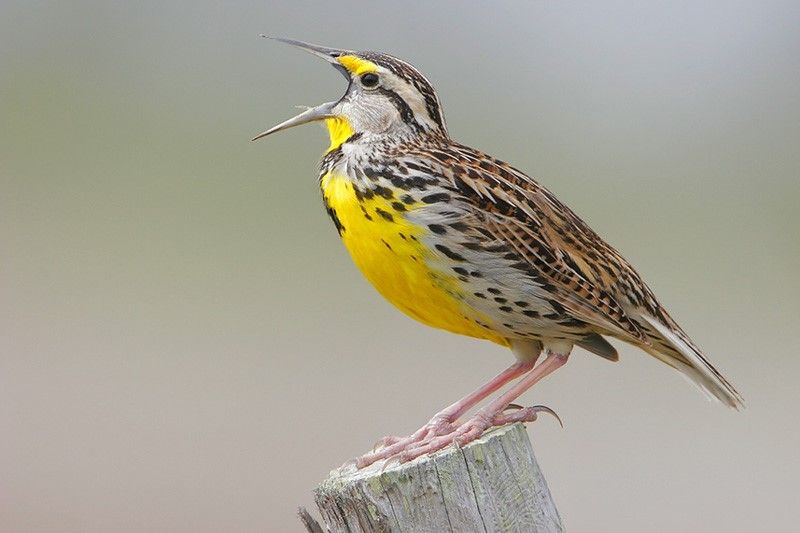 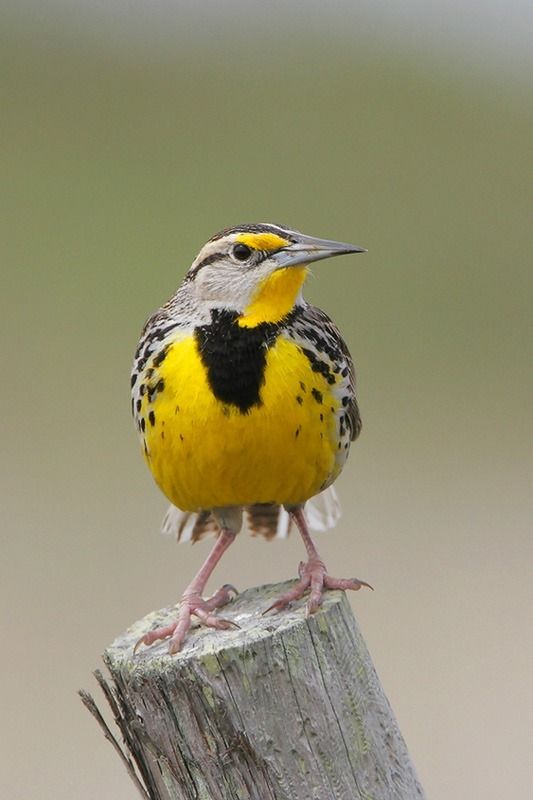 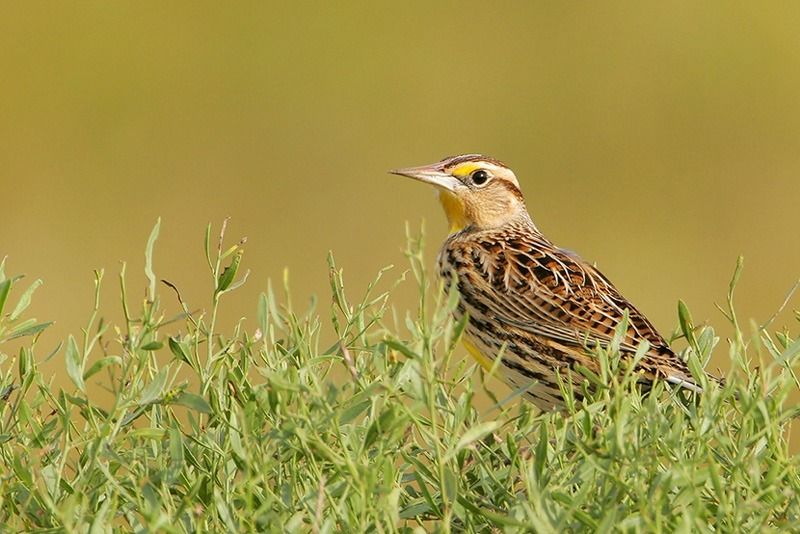