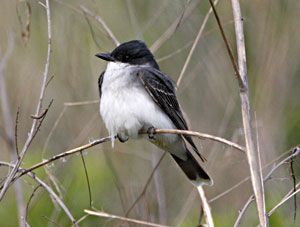 Profile by Richard Gibbons: The Eastern Kingbird is a broad shouldered and big-headed songbird with black head, white underparts and black tail with a white tip. This bird belongs to the one of the oldest and most diverse families of birds, the tyrant flycatchers.

Eastern Kingbirds, like many other flycatchers are insectivores meaning they eat insects. They will perch on something about ten feet off the ground like a bush or fence post then quickly swoop in and catch prey, bringing it back to the same perch to control and swallow the insect, this behavior is common across the flycatcher family and is referred to as “sallying.” If no perch is available kingbirds are perfectly content catching smaller prey and swallowing while in mid-air.

Eastern Kingbirds nest in open habitats in trees such as apple, elm, mulberry, and Norway spruce. The female typically picks the nest site and builds the nest while the male watches over her and guards the nest site from predators and other kingbirds. The nest is made from fine plant matter such as leaflets and twigs, but because kingbirds often nest around human used areas, sometimes cigarette butts or plastic may end up being nest material. Males aggressively defend nests from potential predators including birds much bigger than them like American Crows or Blue Jays, this aggressive defense leads to a higher chance of nest success.

Eastern Kingbirds have a huge breeding range that spans over all of eastern North America During the spring and summer Eastern Kingbirds can be seen on pretty much any grassland habitat east of the Colorado Rocky Mountains. These birds are very common in southeast Texas in the summer, come to our sanctuaries and try to find one for yourself.