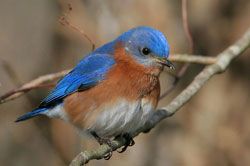 Seasonal Occurrence: Uncommon in all seasons. Breeds in our area.

Profile by Vicki Stittleburg:  Eastern Bluebirds have a chestnut red chin, throat, breast and sides, the bill and legs are dark, and the undertail coverts and belly are white. Males have deep blue upperparts; females have a thin, white eye ring, and are grayish above with bluish wings and tail, and the chestnut is paler on their underparts. Like other members of the thrush family,bluebirds eat insects, berries and other small fruit. Insects caught on the ground are their main food for much of the year. Bluebirds will also swoop from an elevated perch to pursue flying insects.

Bluebirds prefer open habitat with sparse undercover. Bear Creek Park is one of the best locations within the city limits to see them. They also occur regularly in the Spring area and at Brazos Bend State Park. 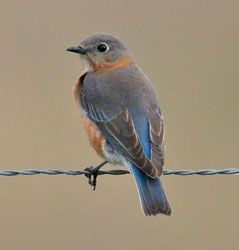