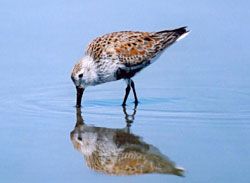 Seasonal Occurrence: Abundant winter and spring. Common in the fall.

Profile by Lark Heston: The Dunlin, a medium-sized sandpiper, spends its winters in large flocks along the North American coasts in mudflats and beaches such as Bolivar Flats. Its winter plumage is drastically different than its breeding plumage, as it lacks the notable black belly patch and rufous-colored back during the winter. Non-breeding Dunlins can be distinguished from non-breeding Red Knots by the Dunlin’s long, drooping bill, plain white flanks, and smaller size.

Noticeable in flight, the Dunlin has dark inner tail feathers and white outer tail feathers. In its wintering ground, this species probes in the mud for invertebrates with a ‘stitching’ behavior. Dunlins breed in the Arctic tundra, where their diet consists mainly of insects and their nests are shallow depressions in the ground, hidden in clumps of grass. Their southward migration is a shorter distance than their sandpiper relatives, as they rarely winter farther south than Mexico.

The Dunlin is a later fall migrant, so start looking for more newcomers along the shoreline! 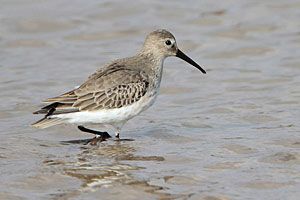 Notes by Vicki Stittleburg: The name Dunlin means "little dun-colored (gray-brown) bird". In winter plumage, the Dunlin has pale gray underparts, brownish gray upperparts and light brown streaking on the breast and nape. In breeding plumage, the bird is so much more brightly colored that it seems like a different bird. In springtime, the Dunlin has a black belly, gray streaking on a white neck and white underparts, and rufous marked wings, back and crown. The Dunlin's long, slightly down-curved black bill helps distinguish it from other sandpipers.

Outside of the breeding season, Dunlins gather in large flocks that can number in the tens of thousands. These dynamic, synchronized flocks may twist and bank in unison, in impressive aerial maneuvers.

Dunlin can be found on coastal mudflats and on the shores of ponds, marshes, and lakes. Dunlin forage by probing in mud, sometimes with a very rapid "stitching" motion, probing several times per second.

Our Bolivar Flats Shorebird Sanctuary is an excellent location to view Dunlins. 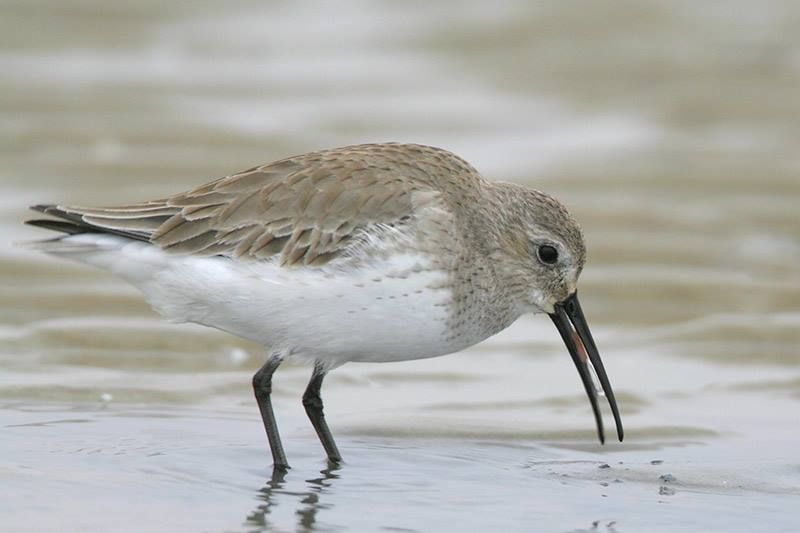 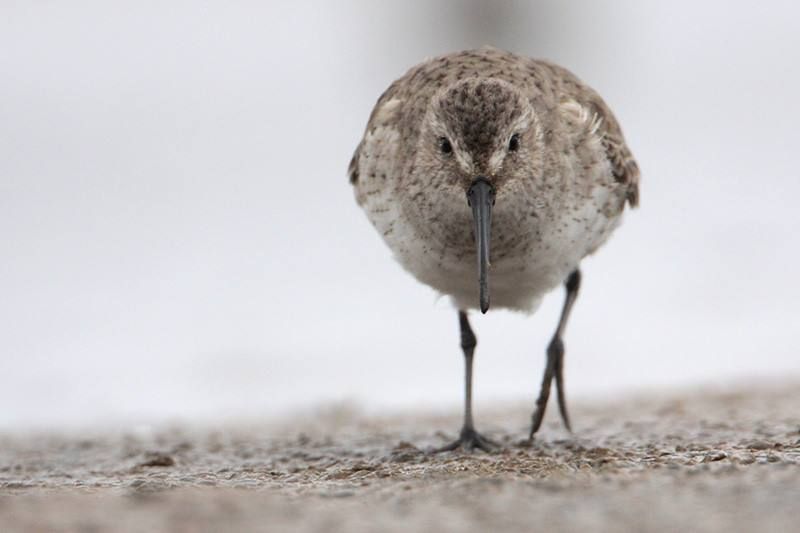