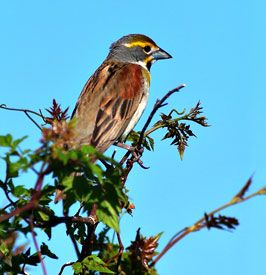 Profile by Glenn Olsen: Grasslands or prairies are one of the most endangered ecosystems in North America. While many people may view a prairie as dull and lifeless because they do not see lots of trees; a prairie is actually teeming with abundance and diversity in plants, insects, and birds. Originally our prairies were a web of life consisting of an amazing diversity of grasses and wildflowers that supported the bison, antelope, deer, numerous species of birds, an abundance of insect species, and other wildlife. While we have almost no original prairie ecosystems remaining, the ranchland and farmland that now occupies part of the original Katy Prairie Area does offer an opportunity to observe birds, plants, and insects associated with grassland habitat. The protection of this open land is critically important to many species of birds.

The Dickcissel is one species that depends upon grasslands, fields, and open pastures for its existence. Breeding males are quite handsome with a gray crown, yellow eyebrow, a yellow breast, and a black bib below the white chin; this pattern is similar to a meadowlark, another grassland-dependent bird. Females lack the black bid and have muted colors and appear sparrow-like in appearance. During the breeding season, Dickcissels feed their young thousands of caterpillars and soft-bodied insects such as flies. The diet of adult birds consists of about one-third insects (mainly grasshoppers), and two-thirds seeds.

Dickcissels are Neotropic migrants. Their primary winter range extends from Mexico to South America, with most residing in the northern countries of South America. They arrive in our area in April, and some remain to breed while others continue north. The primary breeding range consists of the states of the central U.S. By early November most have departed the U. S. for their tropical wintering grounds, which are grasslands, field, pastures, and farmland.

So, if you missed seeing a Dickcissel during spring migration, fall migration is another good time to observe this beautiful bird. Look for it in fields, pastures, and grasslands.