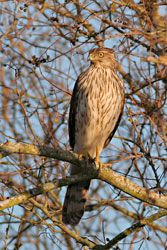 Profile by Glenn Olsen: Fall is a wonderful time to be outdoors, enjoying the weather, the flowers, and the migration of birds, especially fall hawk migration. We have two species of accipiters that regularly occur on the Upper Texas Coast, namely the Cooper's Hawk and the Sharp-shinned Hawk. The best time to see them is during fall hawk migration when we have significant numbers of each passing through. Both the adult and the immature birds of each species are extremely similar in appearance and are easily confused when relying on the plumage for identification. The size, flight pattern, and structural differences of each species are more reliable features to distinguish the species than the plumage but even that is sometimes confusing. The Cooper's Hawk in adult plumage has steel blue-gray upper parts (back). The under parts (breast and belly) are rufous with white barring. The crown is usually darker than the back and this can aid in identification. In this raptor group, females are usually larger than the males. The body of the Cooper's male is 14–16 inches long and weighs 10–14 ounces. Females have a body length of 16–19 inches. They can weigh from 16 to 24 ounces, but average around 18 ounces.

Accipiters like the Cooper's have short, broad wings and long tails. This design suits them well for hunting smaller birds in open forests and scattered woodlands. In contrast, kites have long, narrow wings and short tails. The tail of the Cooper's has a rounded appearance in most positions. This rounded look is due to the graduated length of tail feathers with the outer feathers being shortest. When the tail feathers are closed, the graduated lengths produce the rounded appearance. When the hawk is in flight, look at the tail to see that the outer feathers are shorter. This is not as obvious as it sounds, so it takes practice to learn to see this. In flight, the head of the Cooper's looks large and appears to extend noticeably forward of the wings, giving it a somewhat long neck/head appearance. This is especially noticeable when compared to the Sharp-shinned Hawk which has the appearance of a retracted neck/head. Think of a turtle barely sticking its head out of the shell (Sharp-shinned) versus a turtle's neck fully extended (Cooper's).

While we have a few Cooper's throughout the year, with an occasional nesting pair, we have more during our winter months. Your neighborhood, local park, or backyard feeder may have Cooper's Hawks during our winter months. However, the best time to see Cooper's is during fall hawk migration. Smith Point Hawk Watch is a great place to visit during migration to see Cooper's, Sharp-shinned, and many other raptors. 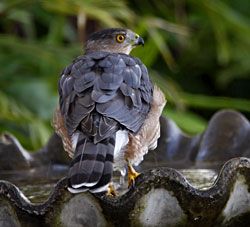 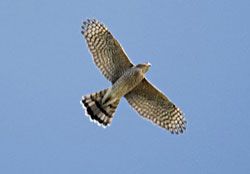 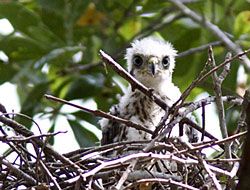 Profile by Will McDaniel: The Cooper's Hawk is a medium-sized raptor ranging from 7.8 to 25 ounces and 14 to 20 inches long, with females often being significantly larger than males of the same age. While adult hawks sport striking red eyes under a black cap with blue-grey backs and pale undersides crossed with thin reddish stripes, juveniles can be picked out by their yellow eyes and brown cap and backs together with black belly stripes. Cooper's Hawks, like other members of the Accipiter genus such as Sharp-shinned Hawks, use their long striped tails and short rounded wings to increase their maneuverability, making them adept at swerving in between trees and other obstacles.

While many Cooper's Hawks live throughout Texas year-round, populations from more northerly states and Canada will migrate to the Texas coast for the winter, with some traveling as far south as Panama. Like many other raptors, Cooper's Hawks do quite well in cities and suburbs, where easy prey and shelter are abundant, though they will often travel to large tracts of forest during the breeding season in order to raise their chicks.

These raptors rely mostly on surprise when hunting, ambushing from a hidden perch and weaving or crashing through heavy vegetation in order to catch their prey unawares. Mostly feeding on birds smaller than themselves, including other hawks, Cooper's Hawks will sometimes catch small mammals or reptiles as well, squeezing them with their talons or occasionally drowning their prey by holding it underwater.

Nicknamed the ‘chicken hawk’, Cooper's Hawks were once heavily persecuted due to the belief that they were a danger to poultry. However, research has shown that they very rarely target chickens, preferring smaller prey such as woodpeckers and doves. While now protected from hunting by law, the Cooper's Hawk is threatened by habitat loss as the forests that make up its preferred breeding grounds become increasingly fragmented and degraded as a result of logging and urban sprawl. 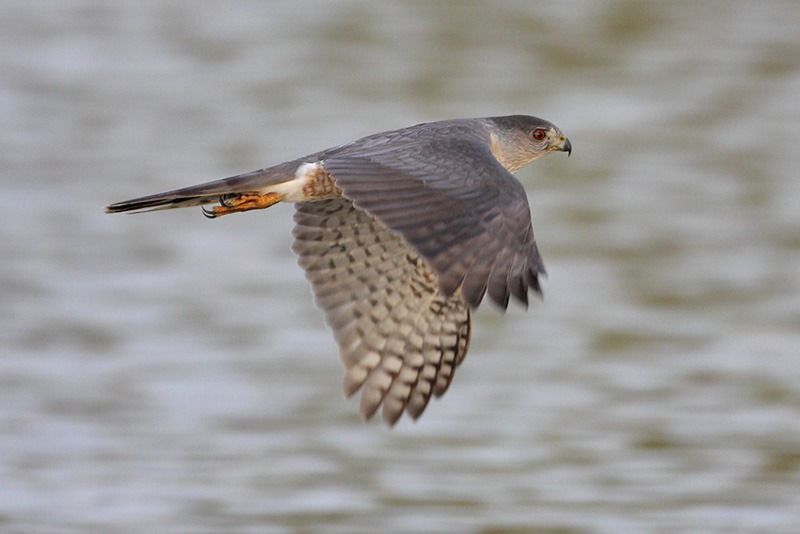 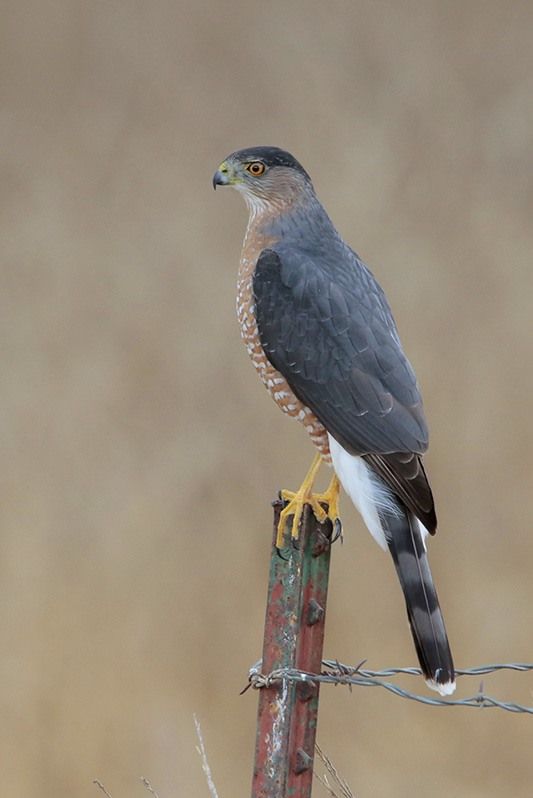 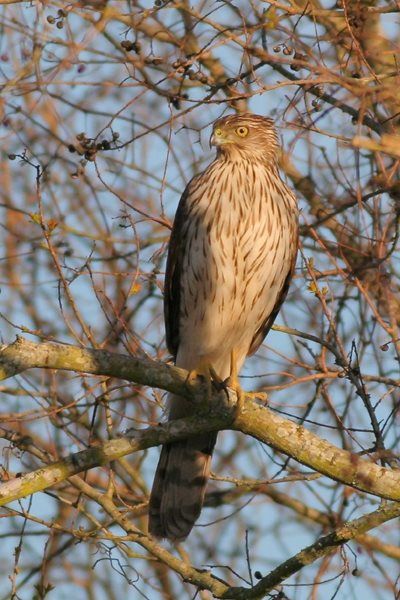