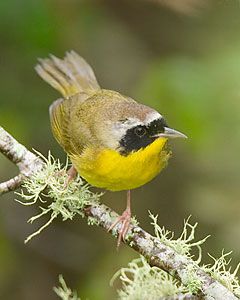 Seasonal Occurrence: Common throughout the year. Nests in our area

Profile by Daniel Elting: The Common Yellowthroat is a small songbird that belongs to the diverse family of wood-warblers. This warbler is one of the most common and widespread of their family as their name suggests. Males are bright yellow with a distinct black face-mask and a thin white line just above it. These facial features are unique among warbler in the U.S, and makes males easily identifiable. Females are a much more drab olive color overall, with yellow coloration on the throat and no black mask.

Common Yellowthroats are seen in all 48 states of the mainland U.S. at some time of year. They breed in the Northeast and Midwest portion of the U.S. and in most of Canada. Females build nests in the same scrubby habitat where they forage, nests are built out of small pieces of grass and sedges. Common Yellowthroats are often victims of brood parasitism, in which a bird of another species (usually Brown-headed Cowbirds) lays an egg in their nest. They often abandon these nests immediately and find a new location to build another.

Common Yellowthroats are encountered year round along the Southeast portion of Texas. Come to our sanctuaries and see one of these birds for yourself! They are often heard before they are seen, in the winter time listen for a harsh “teek” call in the bushes, then keep an eye out for a Common Yellowthroat!

Comments by Don Verser: Common Yellowthroats are common breeders nearby most coastal locations and most records early in season represent singing males. Singing stops in late August and most September records are thought to be migrants. 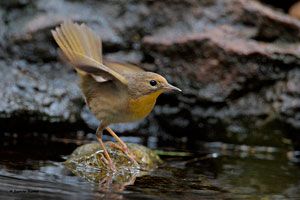