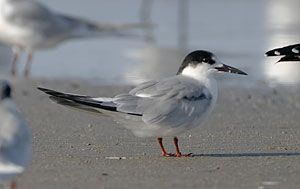 Notes: Common Terns may be found year round on the Upper Texas Coast, but they don't breed here. Instead they breed in large colonies on islands off the Atlantic Coast from Nova Scotia to Virginia. There are also inland populations in Canada. Common Terns look very similar to Forster's Terns, but their bills are redder.
- Susan Billetdeaux