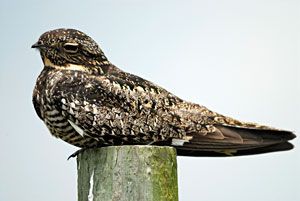 Profile by Richard Gibbons: The Common Nighthawk is a medium-sized bird with long narrow wings. During flight it is easily identified by the stiff wing beats and white wing bars. Like most in the nightjar family the nighthawk sports colors of brown, white, gray, and black, which allows it to easily blend into its environment. Another prominent feature of this bird is it large head that is accompanied by its enormous eyes and small beak.

It is suggested that the Nighthawk received its name from its resemblance to smaller hawks while in flight; however, they are neither closely related to hawks, nor are they strictly nocturnal. They are crepuscular, which means they are most active before dusk and after dawn. They can be seen during the day perching on power lines or the ground. Locally, they are often found on fence posts at the Bolivar Flats Shorebird Sanctuary. Common Nighthawks nest on the ground at Bolivar Flats in open areas with some vegetation.

An interesting behavior of the Common Nighthawk is the booming sound it produces during flight. During the breeding season, they will climb to considerable heights in preparation for their spectacular dive. They can come within feet of the ground before they pull out of their dive. The rapid course change creates the booming sound (some say it sounds like a flame thrower) by forcing air through their wings.

Profile by Glenn Olsen: Our Common Nighthawk is in the Caprimulgidae family along with seven other North American species. This group of birds is commonly called goatsuckers, a name that comes from the erroneous folk tale that they feed by sucking on the teats of goats at night. Nightjar and nighthawk are additional terms used to distinguish birds in this family and respectively refer to subfamilies, Caprimulginae and Chordeilinae. Nightjars are the Common Pauraque, Common Poorwill, Buff-collared Nightjar, and the Chuck-will’s-widow. The nighthawks are the Common, Antillean and Lesser Nighthawks.

The Common Nighthawk is the most widespread species of this family and breeds throughout most of the US and Canada. It is the only species that has been documented to "regularly" breed in our immediate area. It nests on open ground like short grass fields, bare ground, sandy areas, gravel or rocky beds, and even flat roof tops. They do not construct nests but may use a shallow depression or simply bare ground. Common Nighthawks feed on insects while in flight, typically beginning at dusk (crepuscular) but may also be observed feeding any time of day on cloudy, overcast days, at night (nocturnal) around soccer/baseball stadiums lights, or other large lights that attract insects.

It is usually easy to locate these birds in the urban and suburban areas of Houston by simply going outside and looking skyward a little before dark. In flight silhouette, the Common Nighthawk appears a little similar to a falcon, but the flight pattern is more erratic as it feeds on insects. The bird appears generally gray or dark but has white bars near the tips of the wings. In our area during migration it is possible to see Chuck-will’s-widow, Whip-poor-will, Common Nighthawk, and rarely the Lesser Nighthawk. The Chuck-will’s-widow and Whip-poor-will begin arriving in our area in mid-March and the Common Nighthawk around mid-April. You can learn about and enjoy nighthawks and nightjars while adding to the database of information for these species by participating in the Nightjar Survey Network.

Profile by Will McDaniel: The Common Nighthawk is a medium-sized member of the nightjar family ranging from 8.7 to 9.8 inches in length with wingspans between 20 and 24 inches. Excellently camouflaged in drab greys, browns, and blacks that blend into the shadows of tree bark and leaf litter, the nighthawk keeps a literal low profile while at rest with its flattened body shape and horizontal posture. They are most conspicuous in flight, where their forked tails and long, sharply angled wings with white patches help them perform the dramatic aerial maneuvers that help them earn their name. Males can be distinguished by a white bar across their forked tails. Nighthawks are most commonly detected and identified by their distinctive cries, the most common of which is a shrill, nasally peeeet. Males are renowned for their unique ‘booming’ call used to impress females and intimidate foes, usually accompanied by a dramatic dive, and many an unwary intruder has been startled by the geyser-like popping hiss of an unseen female defending her nest.

Nighthawks are crepuscular birds, most active shortly before and after dusk and dawn, though daylight sightings are common in spite of their name. Compensating for their uselessly miniscule beaks with enormous, gaping mouths, Nighthawks snatch flying insects out of the air with great agility and swallow them whole, often congregating near street lights and other artificial light sources such as athletic fields to gorge on the attracted insects. Highly adaptable, Nighthawks can be found any place where bugs are plentiful, from forests and marshes to skyscrapers. Nesting takes place in mid-spring to early fall throughout North America from Mexico to Central Canada, after which these otherwise solitary birds flock together in the thousands to migrate south as far as Argentina. Common Nighthawks are a frequent sight above and around the coastal marshes of the Bolivar Peninsula, and local birders seeking to spot one of these fascinating acrobats still have a few weeks to do so (as of August 2019) before they leave Texas for warmer climes. 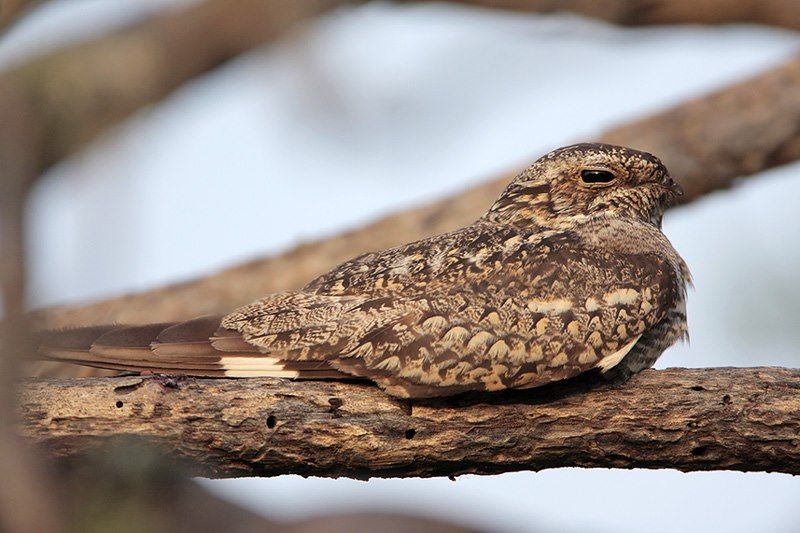 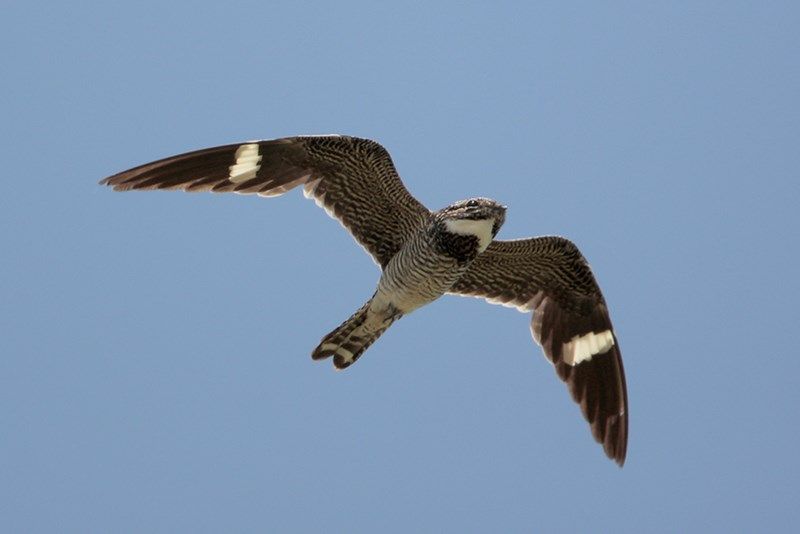 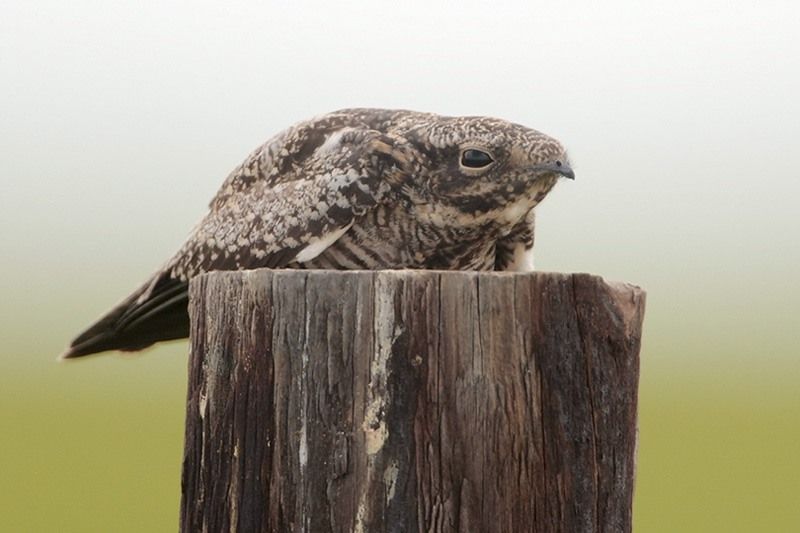