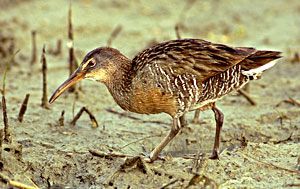 Notes: Clapper Rails are secretive birds found mainly in dense vegetation in coastal saltmarshes and mangroves swamps in eastern North America, Central America, and the Caribbean. In 2014, Maley et al. showed that Clappers were taxonomically distinct from the Ridgway's Rail (Rallus obsoletus), found in the Baja region of the U.S. and Mexico, and the Mangrove Rail (Rallus longirostris) of South America. Another cool finding of this work was that a relatively stable hybrid zone is maintained with the freshwater-loving King Rail. This means intermediate hybrids (Cling or Klapping?) can be found regularly, but that distinct populations are maintained by the very strong selection pressure of the ability to process saltwater; Clappers can, Kings can't, while intermediates can only persist in the brackish areas.

Clapper Rails tend to be gray to reddish with dull stripes on the flanks and reddish underside and chest, however there is much regional variation in plumage. They have a slightly down curved bill that is orange toward the base. While they are abundant in coastal wetlands, Clapper Rails are more often heard than seen. Their distinctive repeating chk chk chk call, which resembles the sound of clapping hands, gives away their presence.

Clapper Rails are omnivorous, eating anything they come across, including fiddler crabs, snails, small fish, eggs, and plant matter. They forage and build nests among dense vegetation mainly walking and swimming, they only rarely take to the air. Their nests are typically built up on a platform of vegetation to avoid tidal flooding, and often have ramps to enable entry and exit in areas with large water level fluctuations. Eggs that have been submerged in up to 18 inches of water during high tide are still capable of hatching. Young Clapper Rail chicks are downy black when they hatch and can sometimes be seen riding the adults’ backs during periods of high water or when the birds move across open water.

The clap of the Clapper Rail can often be heard calling out in the marsh and salt flats of Houston Audubon’s Bolivar Flats Shorebird Sanctuary. Come down for a walk on the beach and see if you can hear this elusive bird!