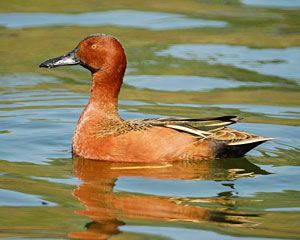 Profile by Glenn Olsen: Winter on the upper Texas coast is a fantastic time to enjoy the out of doors and is the best time to observe ducks. Our coastal marshes, bays, ponds, lakes, flooded rice fields, and farmlands provide a diverse range of habitats for many species of ducks.

Of the many beautifully plumaged ducks, the Cinnamon Teal is a thrill to see because it is uncommon in abundance and is distinctly attractive in appearance. The breeding range of Cinnamon Teal includes Mexico, the western United States, and southern Canada. During winter months they are thinly dispersed through the lower half of the western States, Mexico, and the southern part of Texas up to the upper coast. It is uncommon in our area but a few are usually found in most winters and it is exciting to find one.

The male in breeding plumage is quite distinctive, beautiful and easily identified. The head, sides and belly are a deep, rich cinnamon red color. Red eyes accent the coppery red head and a blackish rear end contrasts nicely with the body. While the adult male is unmistakable, the female, like many other female ducks is mottled browns without distinctive plumage markings. The female is very similar to a female blue winged teal and separating the two in the field can be quite challenging and fun. To distinguish between the two females requires some experience with both species and good viewing conditions. Differences are slight but generally the female Cinnamon Teal has a less distinct eyeline or no eyeline and less white giving it a plainer looking face, and a slightly longer and wider bill structure giving it a subtle appearance suggestive of a northern shoveler's bill. However, these subtle differences are more easily described than they are seen. Even with experience and favorable viewing conditions it may not be possible to reliably identify a lone female in all cases.

To gain that experience and practice in separating duck species one needs to get out in the field and look at ducks. There are good places to see some of the 21 species of ducks that winter in our area and include the Katy Prairie flooded fields, Attwater's National Wildlife refuge, and Brazos Bend State Park. A Cinnamon Teal has been reported at Hermann Park in the past. So, look for them wherever there is a pond.