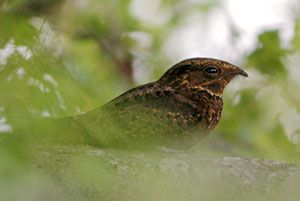 Seasonal Occurrence: Most common in spring and fall.

Profile by Meghan Anne:  Chuck-will's-widow is our largest nightjar, but is still extremely well camouflaged and a challenge to find during the day. They will be on the ground or perched on a low horizontal branch. They are a warm brown color overall, with delicately patterned feathers that make them disappear into bark or dead leaves. Their wings are entirely brown and they have white inner webs of their outer tail feathers, which you will often not see in flight. If you flush one by chance, they can be quickly distinguished from the Whip-poor-will which has prominent white corners on the tail, and the Common Nighthawk, which has bold white slashes in the wings. If you haven't found them during the day, you will certainly hear them repeatedly calling their name through the night, the first "chuck" very soft.

This nightjar breeds through the Southeast and Mid-Atlantic, including east and central Texas. During migration you may find them closer to the coast, one was spotted this week at Boy Scout Woods Sanctuary in High Island, and more are likely to be seen and heard throughout April. They nest on the ground in a variety of dry woodlands, including pine and deciduous forests.

Chuck-will's-widow is an aerial forager. They fly low over the ground hunting for flying insects, mostly moths, beetles and dragonflies. Very occasionally they have been reported eating small birds and bats, including a number of warblers. They have long stiff "whiskers" -which are actually feathers- around their bill. These specialized feathers are called rictal bristles and it is thought that they help guide prey into their mouth and protect their all-important vision from prey hurtling toward their faces. 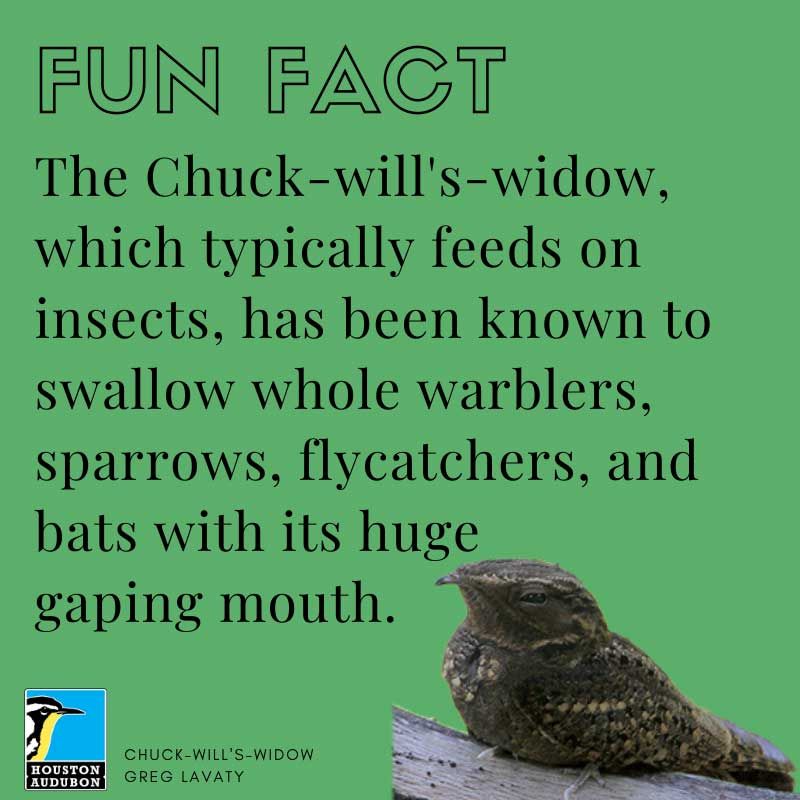