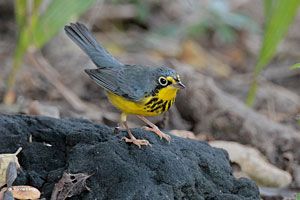 Profile by Richard Gibbons: The Canada Warbler is a small songbird with a yellow throat, chest, and belly, and a dark grey back. Males have a distinctive pattern of dark streaks across their chest resulting in it often being referred to as the “Necklaced Warbler”.

Canada Warblers breed in Canada, the northeastern US and through the Allegheny Mountains to Tennessee and Georgia. They winter in northern South America and pass through Texas during spring and autumn migration. Their preferred habitat is moist forest with dense shrub understory where they can forage for insects on leaves, twigs, and on the wing.

Our High Island sanctuaries and Edith L. Moore Nature Sanctuary in West Houston are great places to see the Canada Warbler; search for it foraging in the lower canopy, understory, and thickets. They are decidedly more common in the Houston area during fall migration.

Profile by Glenn Olsen: As spring approaches many birders begin to think about the arrival of the neo-tropical migrants, especially the warblers. Many warblers have bright and colorful plumage. Their beauty and identification challenges coupled with the arrival of spring bring many birders out to look for these magical birds. The Canada Warbler is one of the sought-after warblers during spring migration. From its winter home in South America, the Canada Warbler begins to arrive on the Upper Texas Coast around mid-April but is most numerous here in late April and early May. This species is en route to breeding grounds that range from the Appalachian Mountains to north-central and eastern United States and into most of Canada. The preferred breeding habitat is moist woodlands and thickets, brushy stream sides and moist ravines.

This beautiful bird has bright yellow underparts extending from the chin to the lower belly and white undertail coverts. The breast is decorated with a black "necklace of streaks". The upperparts range from blue-gray to olive-gray in color. Spring adult males are the most brightly colored with a distinctive black necklace, black in the face below the eye and on the forehead. The black in the face makes the white eye ring more prominent. In first spring males and females the black in the face and necklace is greatly reduced and the extent of black varies between individual birds.

When searching for this bird at High Island, Smith Oaks or other suitable habitat, look for it foraging in the branches of the lower canopy, (usually less than 15 feet), brushy understory, thickets, and dead tree tops on the ground. This species may also be observed "flycatching" while foraging.

Notes by Don Verser: Canada is one of the most common fall warblers and is usually found in woods such as at High Island or Sabine and is often seen flycatching near the ground. Most fall Canada Warblers look like spring birds and it is not uncommon to find very distinctive breeding plumaged males. However, necklace streaks may be very indistinct and almost absent on some birds suggesting Nashville but note white undertail compared to yellow undertail of Nashville.