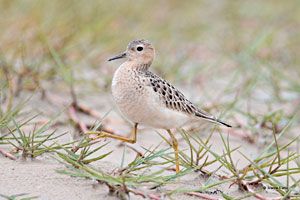 Notes by Glenn Olsen: One of our most sought-after shorebirds, this beautiful sandpiper is most often found in that diminishing habitat that we call the shortgrass prairie. If we are fortunate, we find this sandpiper when it migrates through our area. Around here, the shortgrass prairie is gone, replaced with shortgrass pasture, parks, golf courses, and sod farms. In fact sod farms and grassy parks are good places to search for this sandpiper. It may also be found searching for food in other open type habitats like recently tilled farmland, damp rice fields with emergent vegetation, and damp to dry fields with stubble from last year's crop.

Roughly the size of a cardinal, the characteristic coloring of this species is buff—not only the breast but also the back. Buff means a pale yellowish-brown (ochre) color. The back appears mottled because of the dark brown and black centers of the feathers. A rounded, dove-like head with a pale buffy face and a prominent black eye create a distinct facial image. The buff breast fades into a whitish lower belly and undertail coverts competing the color pattern.
It is thought that the species once numbered near a million or more birds. Loss of habitat and over-hunting before the establishment of the Migratory Bird Treaty Act dramatically impacted this species. Estimates now range from as low as 54,000 to a high of only 84,000 individual birds.

A long-distance migrant, the Buff-breasted Sandpiper spends the months of our winter in the grasslands of South America, primarily Argentina. In the spring, the birds travel north, some stopping in our area to rest and refuel. This half of their journey is approximately 5,000 miles. Once rested and nourished, they continue their journey (3,600 or more miles) to the breeding grounds of the arctic regions of northern Canada, Alaska, and Siberia. Here, males find a small spot to begin a display ritual to attract a mate. We call this area where a male bird performs courtship rituals or displays a lek. The Buff-breasted Sandpiper is the only known shorebird in North America that uses a lek!