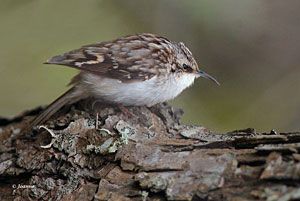 Notes: The Brown Creeper has mottled, brown and white upperparts, white underparts, a brown head with a pale eyebrow, a white throat, a short, downcurved bill, and buffy undertail coverts. This plumage allows the bird to camouflage with the bark of a tree; it often goes unnoticed until what looked like a flake of bark suddenly takes the shape of a bird.

Aptly named, the Brown Creeper forages for small insects and spiders by slowly spiraling up a tree trunk. Creepers move with short, jerky motions using their stiff tails for support. When the bird reaches the upper branches, it flies to the base of another tree and begins another foraging ascent. Though Brown Creepers are common woodland birds, they can difficult to detect. Their high pitched 'tseee' call often reveals their presence. The greatest numbers of Brown Creepers in the Houston area are observed between January and March.
- Vicki Stittleburg