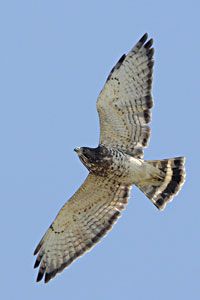 Profile by Glenn Olsen: The hot, dry days of August keep most people inside where the air conditioning makes life in Texas bearable. But if you are inside, you will miss the amazing fall migration of hawks along the Gulf Coast. Fall raptor migration is from mid-August to mid-November with prime viewing time from mid-September to mid-October. One of the most numerous hawks counted at the Smith Point Hawk Watch is the Broad-winged Hawk. During prime migration days, numbers usually range from a few to several hundred in a day. Learning to identify this hawk greatly helps with sorting through the other migrating raptors since it is typically the most abundant hawk observed.

Identifying hawks in flight is based primarily on flight pattern, color pattern, wing and body shape, and relative size. This species is slightly smaller than the Red-shouldered Hawk and in flight appears compact and stubby with comparatively short, broad wings. Typical color pattern of an adult bird in flight consists of dark tipped primaries and dark trailing edge of the wings contrasting with the light color of the remaining wing. The black and white banded tail is distinctive. There is a rare dark morph and immature birds resemble but are not identical to immature Red-shouldered Hawks. Broad-winged Hawks are passing thorough our area as they migrate from their breeding grounds in the northeast and southern Canada. They winter in Central and South America.

In the early morning hours before thermals encourage hawks to continue moving south, you may find the Broad-winged Hawk perched in a tree of any wooded area, along a creek, or in a park. They hunt primarily from a perch and wait for movement of a rodent, small mammal, reptile, amphibian, or small bird and then swoop down on the prey. During migration you can find Broad-winged Hawks almost any place by looking overheard or by visiting a local park that has woodlands. However, the Smith Point Hawk watch site is a good place to find them in greater numbers as they migrate south. I encourage you to get out and bird in the cooler hours of the day and look for the Broad-winged Hawk and the many other species of raptors that we see in migration.

Profile: The Broad-winged Hawk is a small sized raptor with a brown upper body, reddish head, barred undersides, and a black and white banded tail. Broad-winged Hawks are what birders like to call “Buteos” which refers to their genus. Buteos are typically distinguished from the other major genus of hawk Accipiter (which includes Sharp-shinned and Cooper’s hawks) by broad wings, and a fan-shape tail.

Broad-winged Hawks are well known for their dramatic fall migration south to South America. Flocks of thousands of birds or “kettles” will form inside large invisible vertical wind currents known as thermals. Broad-wings will swirl upwards in these thermals for thousands of feet, and use this vertical advantage to ease soaring for long distances on their migration.

Broad-winged Hawks prefer dense forest habitat, and typically hunt from perches underneath the forest canopy. They will eat any small animal they can catch, which mostly includes small rodents, amphibians, and insects. They typically nest in trees in the forest, and build their nests out of dead twigs, lichen, and moss.

Come to our sanctuaries and see these birds in action! Fall is the best time to see Broad-winged Hawks around our sanctuaries; they are very often seen in and around our woods on their way south. If you would like to witness their amazing fall migration, our friends over at Smith Point Hawk Watch have an observation tower where you are welcome to view these spectacular kettles for yourself! 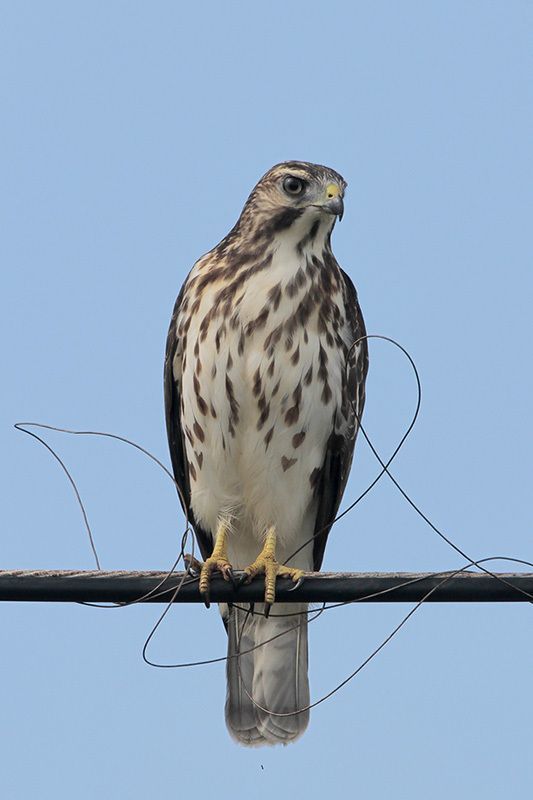 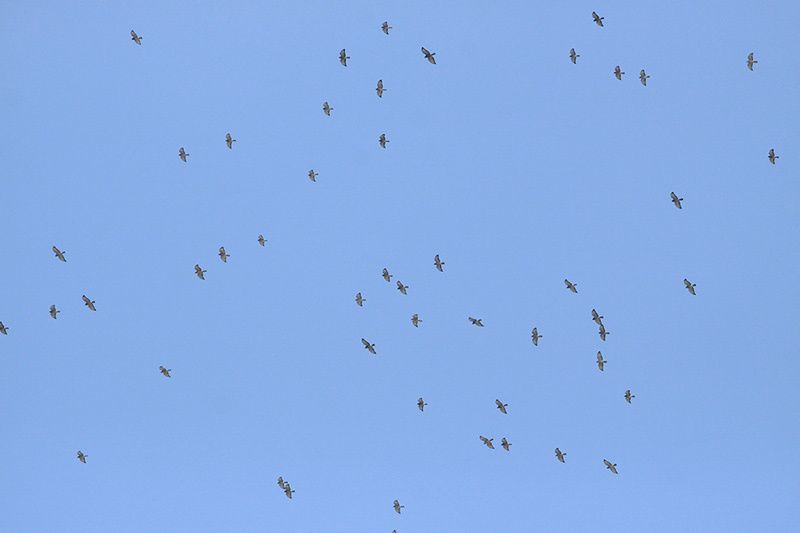 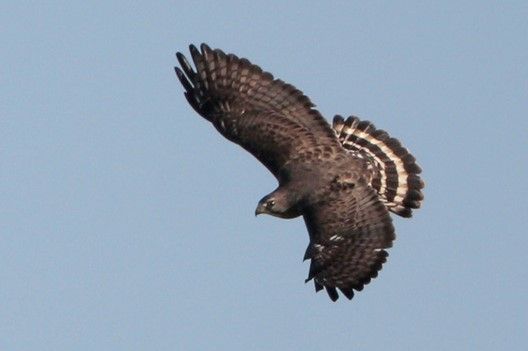