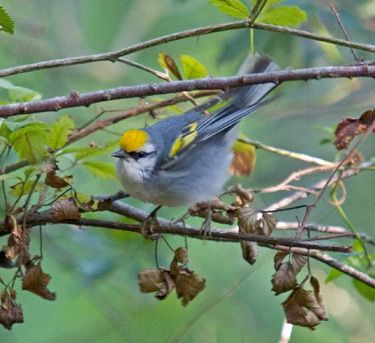 Seasonal Occurrence: Most likely in early and mid-April; fall migration is mid-September to early October

Notes: The Brewster's Warbler was first identified in Massachusetts by William Brewster in 1874. At first it was thought to be a new species and was given the scientific name of Vermivora leucobronchialis. Later, it was recognized to be a hybrid of Blue-winged and Golden-winged Warblers. The Brewster's Warbler is a combination of dominant genetic characteristics. It has the black eyeline of the Blue-winged Warbler but its underparts are white with yellowish wash in varying degrees and a yellow cap. The wing bars are generally 2 in number and are usually yellowish. Females are paler and grayer with often more extensive yellow on the breast. There is also a much rarer hybrid, called Lawrence's Warbler which is a combination of recessive genes.
- Susan Billetdeaux