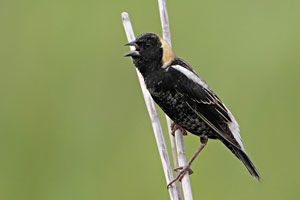 Notes: Male Bobolinks in breeding plumage are easy to recognize. The combination of yellow, black and white is unlike any other North American bird. After breeding, males acquire basic plumage which is very similar to females: predominant colors are yellow and buff with black stripes on the head. They are much more common in the eastern half of the U.S. and are rare in Texas. They breed throughout the northern U.S. and Canada and winter in South America. Bobolinks, along with the grasslands upon which they depend, have been in decline over the past several years. Conservation efforts are going on in many states and Canadian provinces where they breed. Conservation and proper management of grasslands and farms are vital to provide nesting habitat.
- Susan Billetdeaux