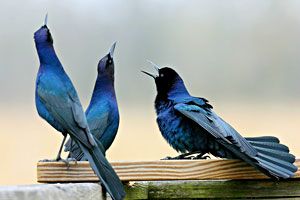 Seasonal Occurrence: Year round resident, but location may vary by season.

Notes: Boat-tailed Grackles are distinguished from Great-tailed Grackles on the Upper Texas Coast by their dark eyes and more rounded heads. Their distribution pattern on the Upper Texas Coast is somewhat puzzling. Although field guides state they are usually found close to salt water, they can be difficult to spot on the Bolivar Peninsula, particularly in the summer. Bill Godley, a volunteer at Brazos Bend State Park provides this explanation for their spotty distribution:

"The prominent Grackle species at Brazos Bend State Park during the summer is the Boat-tailed Grackle. There are many of them - most noticeable during May and June when they are showing off for a variety of reasons; they are quite vocal with a distinctive whistle which is much more pleasant than its cousin. They have been recognized at the park ever since their species was separated from the Great-tailed Grackle years ago. They greatly outnumber the Great-tailed Grackle at the park during the summer, and it is not unusual to see this species in large fresh water marshes within 50 miles of the coast. Brazos Bend State Park is likely the best example of this on the Upper Texas Coast. On our hikes we often tell folks that "BBSP is one of the few places in the United States where you can see all three species of grackle in one location." How lucky can guests be? The winter sees the ratio reverse itself between these two large bird species. Boat-tailed head for the coast although we are still able to find a few on our Christmas Bird Count. Oddly, the Common Grackle is the most difficult of the 3 species to find in the park itself at any time of year. Outside the park is a different story."

Winnie Burkett reports that she sees them at High Island and at Anahuac NWR. Sometimes they are also found along Hwy. 87 between High Island and Rollover Pass.
- Susan Billetdeaux