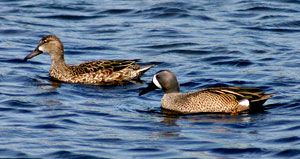 Notes by Vicki Stittleburg: Breeding males are brown-bodied with dark speckling on their rusty breast, have a blueish gray head and a bold white crescent on their face. Females are mottled brown overall, have a fairly bold dark eye line and a white throat. In early fall males resemble females, with adult males usually acquiring their breeding plumage by mid-November. In flight, a bold powder-blue patch on the upperwing coverts is visible.

Blue-winged Teal are the second most abundant duck in North America, behind the Mallard. A small dabbling duck, this bird feeds by tipping up its tail and dunking its head underwater. They consume sedge and grass seeds, pondweeds, duckweeds, and aquatic invertebrates. Blue-winged Teal are long distant migrants, summering as far north as the Canadian tundra and wintering mainly in Central and South America. They are among the latest ducks to migrate northward in spring, and one of the first to migrate southward in fall.

Blue-winged Teal can be observed on calm bodies of water from marshes to small lakes. The best sites to see them include Warren Lake and Brazos Bend State Park.