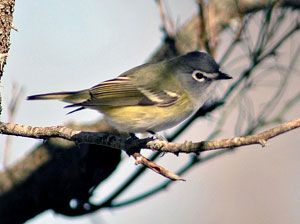 Profile by Meghan Anne:  The Blue-headed Vireo winters in the southeast US including the southeast portion of Texas. It breeds throughout most of Canada, and between New England and northern Georgia in the US. The identification of the Blue-headed Vireo is as straightforward as the name implies. It has a blue-gray head with white spectacles, yellowish flanks, a white belly and two white wing bars.

This vireo was previously lumped with Plumbeous and Cassin's Vireo as one species, called the Solitary Vireo. The Blue-headed Vireo is the most brightly colored of the three and is the only one that resides in the eastern US. As their previous common (and current scientific) name indicates, they are often found alone and will be foraging methodically for insects in the middle to upper levels of trees. In the winter they also add small berries and fruits to make up more than a quarter of their diet. Their habitat is mixed conifer-deciduous forest and in the winter they are found regularly at our Edith L. Moore Nature Sanctuary and High Island sanctuaries.

Profile by Glenn Olsen: Winter on the Upper Coast is such a wonderful season for birding. Cool weather, only a few mosquitos, and lots of awesome birds. One of my favorite wintering birds is the Blue-headed Vireo. You are most likely to find this uncommon bird hopping ever so slowly and deliberately from limb to limb in a tree as it searches for insect eggs or a lethargic insect. The white around the eye that extends to the base of the bill is quite prominent and gives the bird the appearance of wearing eyeglasses. We refer to this pattern of white as spectacles. The white of the spectacles is accented by the contrast of the soft, faded blue color of the crown and cheeks making for a distinctive head pattern. Dull olive greenish back and wings with two dull white wing bars, white chin, throat, and belly with flanks washed in yellow complete the attire of this dashingly handsome bird.

Prior to 1997 this species was a member of a three-bird group referred to as the Solitary Vireo complex. After the three were split into separate species based on DNA studies we now have the Blue-headed Vireo (V. solitarius), the Plumbeous (V. plumbeus) and Cassin's (V. cassinii).

The Blue-headed Vireo winters in the southeastern states and Mexico. It is most common in our area from early November to early March. The breeding range is primarily Canada but also includes states around the Great Lakes, the New England States, and the Appalachian Mountains.

As the species name implies, I do not recall ever seeing two or more together. However, I think it well worth a day spent searching the trees for one of these colorful, handsome and uncommon birds. I will look for you when I am out searching for one myself. 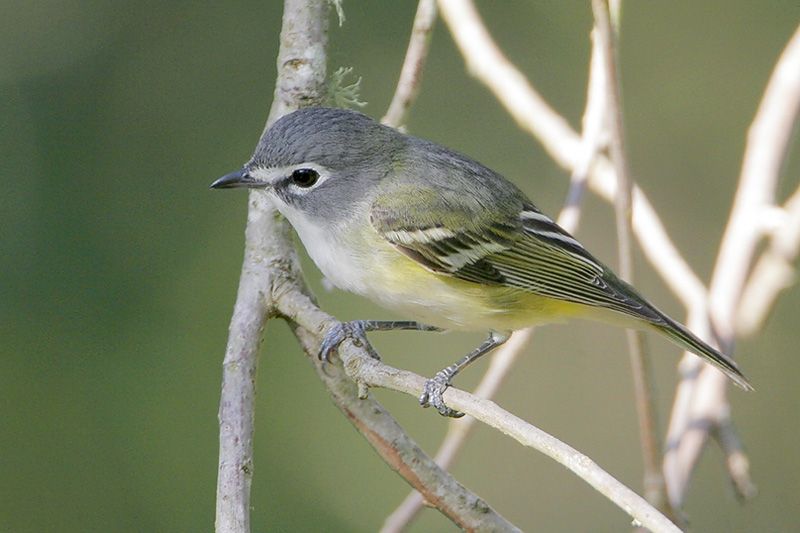