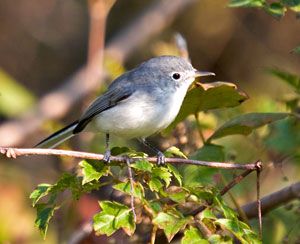 Seasonal Occurrence: Common August through April. Scarce in summer. A few breed in our area.

Profile by Glenn Olsen: This midget of a bird is often overlooked and for some reason not easily remembered. In my birding identification classes I suggest people try to visualize some "impression" or make an "association" with a bird to aid in anchoring the image in the mind for future identification reference. For me the impression that I first made with the Blue-gray Gnatcatcher was that it made me think of a diminutive Northern Mockingbird. This memory aid refers to the body shape, tail length, and basic color pattern. The gnatcatcher's body structure and longish tail remind me of a miniature mockingbird. The gnatcatcher is quite beautiful with blue-gray above and white below. In comparison, the mockingbird is gray above and white below. Other distinguishing features for the gnatcatcher are its much smaller size, the white outer tail feathers, and the distinctive white eye ring. In breeding plumage, males have a black line extending from above the eye to the top of the bill. When the male looks directly at you, it has an "angry bird" appearance.

Gnatcatchers can be found in a variety of habitats ranging from mixed upland forests, wooded swamps, to brushy habitat of shrubs and tall grasses. Behavior-wise, the gnatcatcher is a tiny little dynamo in constant motion. It hops from branch to branch, shrub to shrub, or stalk to stalk—repeatedly flicking its tail—while it searches for insects or sallies out to catch a fleeing insect. The majority of the population breeds from Maryland, the Virginias, Kentucky, southern Missouri and eastern Oklahoma south to northern Florida and the Gulf Coast. Their tiny nests are placed about mid-length on a limb and may be from 5 to 70 feet off the ground. The nest is finely woven with rootlets, plant down, grass, spider web, and covered with lichen to conceal it.

While you may find a few of these birds during our summer months, and some winter in our area, they are most numerous during fall migration. At Smith Point I have seen hundreds of these tiny birds in a day as they migrate to winter quarters along the Gulf and into Mexico and Central America.

Profile by Lark Heston: The Blue-gray Gnatcatcher is a tiny bird that can be easily identified by its buzz-like ‘pzzz’ call that it makes as it energetically flits about and hovers in treetops, pursuing insects to eat.

As its name indicates, its body is of a blue-gray color on top and paler gray below, though females and non-breeding males have more of a gray hue rather than the notable blue-gray. Their long tails are black and bordered by white outer feathers, and they have a distinct white eyering. Breeding males appear to have “angry eyebrows” due to a black "V" shape above the bill that extends above the eyes. To uncover insects among the leaves, the Blue-gray Gnatcatcher flicks its tail back and forth, flashing the white edges. While perched, it often holds its tail straight up or to one side.

A single pair of Blue-gray Gnatcatchers can build up to seven nests in one breeding season as insurance against predators, parasites, and nest parasites such as cowbirds. They use lichen, spiderwebs, and plant material to secure the nest on the top of a single branch. These birds are very territorial, and males are not opposed to participating in an aerial brawl, where they snap at each other from great heights until the intruder is deterred or the territory is stolen.

In recent decades, the range of this species has been increasingly shifting north, likely due to the increasing temperatures in certain parts of the year. Their preferred habitat consists of deciduous trees that are near edges and water sources such as streams. The Blue-gray Gnatcatcher population is currently stable.

Profile by Will McDaniel: The Blue-gray Gnatcatcher is a rather tiny songbird, only 4-5 inches in length and weighing less than a quarter of a gram. They can be identified by their short whining call, white eye rings, a thin straight bill, titular blue-gray upperparts, and a long dark tail that appears white from beneath. Juveniles are more greenish colored. Males can be distinguished by more vivid coloring and, in the breeding season, a black eyebrow-like V-shape on their heads that gives them a very comical ‘angry’ appearance. These songbirds are active and energetic foragers, flicking through the treetops in a blur of constant motion as they search for insects, even stealing insects from spider webs as they pass by in addition to the spiders themselves.

Blue-gray Gnatcatchers are widespread throughout North America, from Ontario and the Rocky Mountains to Mexico and the Atlantic coast, residing in a variety of habitats including deciduous woodlands, pine forests, and western scrublands. While most populations migrate to Central America for the winter, those inhabiting the Gulf Coast remain year round to entertain birders with their energetic antics. Nests are small and cup-like, saddled horizontally on tree branches and disguised as tree knots with strips of lichen stuck on with spider webs. A clutch of 4-5 eggs are incubated for 2 weeks, and hatchlings remain in the nest for another two weeks before striking out on their own. 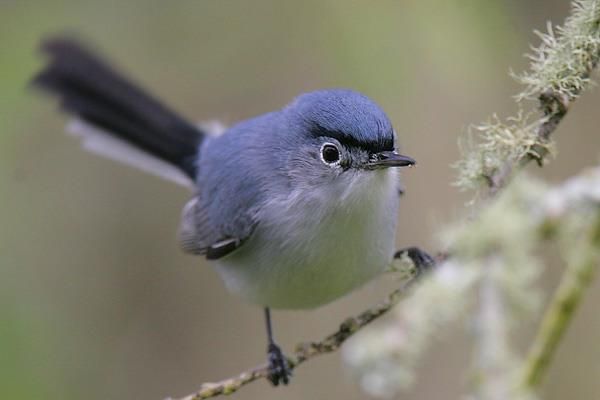 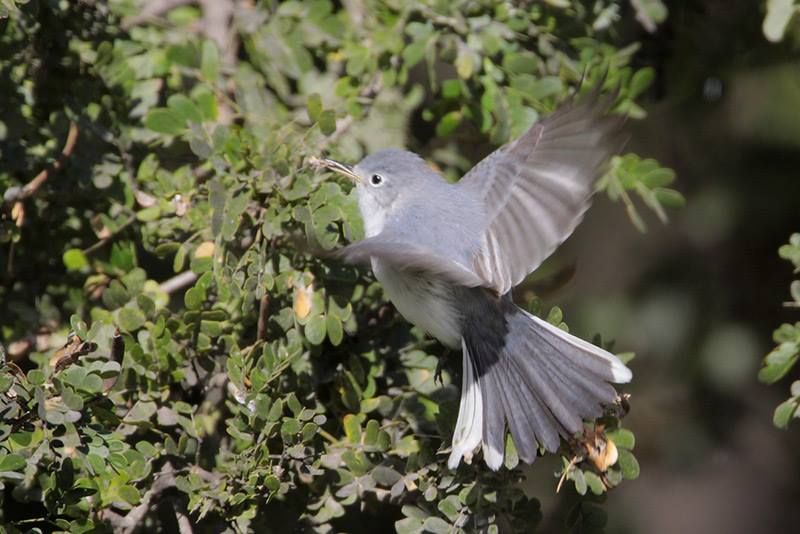 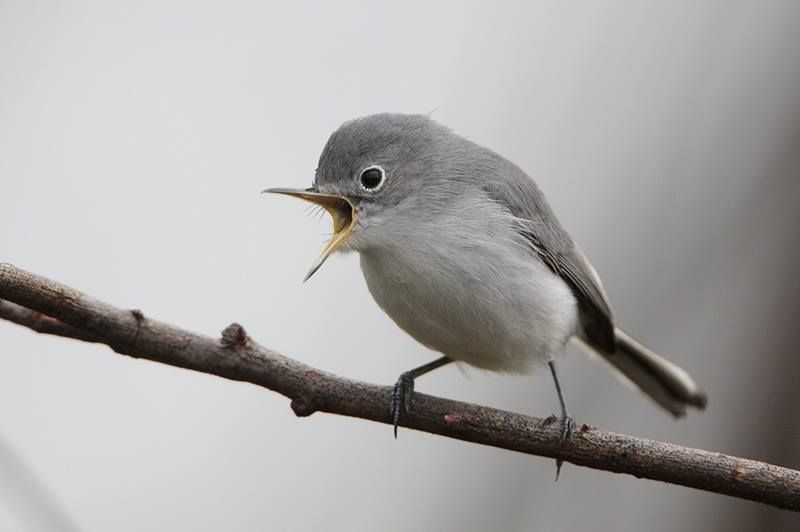 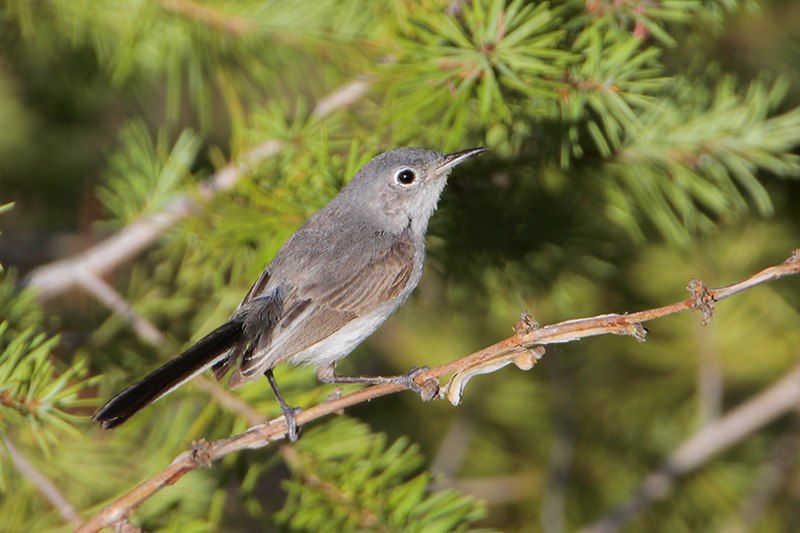