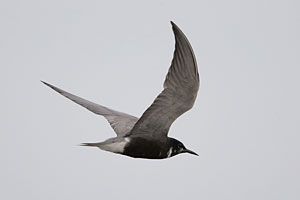 Beak of the Week by Daniel Elting: The Black Tern is probably the most aesthetically unique of the terns found in North America. While in breeding plumage the Black Tern has a fully black head, breast, and belly with gray wings and a small slender bill. In the non-breeding season this tern undergoes a significant plumage change where all its black parts turn white except for a small patch of black that remains behind the eye.

Black Terns are on the smaller end of North American Terns, with only the tiny Least tern being smaller in size. Most other terns are piscivores (fish eaters) and while Black Terns are known to catch fish, the bulk of their diet consists of small invertebrates caught while in flight. Black Terns are very social, usually migrating and roosting in flocks of around 100 birds but sometimes up to ten thousand.

Black Terns prefer marshy habitats for nesting and foraging. They breed in loose colonies, often having a fair amount of space between nests. They nest in very moist areas, nests are place very low in the marshes often atop a floating mat of vegetation. It is not uncommon for the eggs of a Black Tern nest to be damp during incubation. Young typically take about 25 days to reach fledge age and parents may continue to feed the young up to two weeks after their first flight.

Black Terns breed in the northern parts of the central U.S. and throughout most of central Canada. During migration they are commonly seen along three of the four major flyways of North America but are rarely seen in the U.S. Southwest. Many pairs have already finished breeding by late July and are starting to disperse from their breeding range. They will spend their winters out at sea or in South America. Black Terns are returning to our Bolivar Flats Sanctuary and can be seen loafing with large groups of other tern species, come take a look!

Profile by Glenn Olsen: We have eight species of terns that can be easily observed on the Upper Texas Coast at the proper time of year and in proper habitat for each species. Some species, like the Forster's and Royal Terns can be seen throughout the year. Others, such as the Common Tern or Black Tern must be observed during the few months that they are here. For the Black Tern, the best months to see this species are May, and July through September. Although the plumage of this species is not brightly colored, it is nonetheless a stunningly beautiful tern. One would not think that the basic, dull colors of black, white, and dark gray could combine to produce such an attractive bird. In breeding plumage the head, nape, mantle, breast, and belly are black. The wings are dark gray, and the under tail coverts and vent area are white. In non-breeding plumage the back is dark gray and the under parts are white and only the nape is black. We may see the bird in either of those plumages or in one of several stages of molt in between.

The Black Tern is a small tern, larger than a Least Tern but smaller than a Forster's Tern with a small bill and rounded head. It breeds in small, loose colonies in freshwater marshes, ponds, and lakes of the northern United States and southern Canada. The primary winter range is along the coast of northern South America. We see the species primarily during migration. In flight, the species has a buoyant, slightly erratic flight pattern as it searches for food. Rarely does this species dive into the water but most often drops gracefully and plucks prey from the surface of the water or marsh. I encourage you to make a trip to the coast and spend a few minutes enjoying all of our terns and look for a few of the Black Terns that will be in with a mixed species group of resting birds. 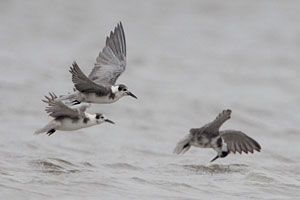