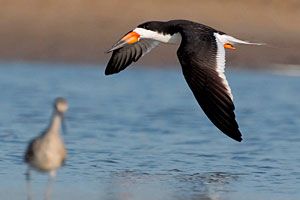 Seasonal Occurrence: Very common throughout the year; breeds in our area

Profile by Vicki Stittleburg: The only American representative of the skimmer family, the Black Skimmer has a jet black back and cap, white underparts, long pointed wings, and short red legs. The long, thick, red and black beak of the Black Skimmer makes it unique among North American birds; it is the only bird with a lower mandible that is longer than its upper mandible. The Black Skimmer's vertical pupils are also distinctive. Their catlike pupils protect their retinas from the glare of sun-drenched beaches and reflective ocean water.

The Black Skimmer has an unusual foraging technique. In search of small fish, a feeding skimmer flies low over the water with its bill open and its lower mandible slicing the surface. When the mandible touches a fish, the upper bill snaps down instantly to catch it. In addition to small fish, Black Skimmers will also consume small crustaceans.

One of the largest and most successful colonies of Black Skimmers in Texas is at the Dow Industrial Complex at Freeport. One day each year, Dow opens its facility to members of the public interested in viewing the skimmers which now number in the hundreds. Anyone interested in attending the event should arrive at the Dow A-41 Gate located on FM 523, approximately one mile south of the intersection of Highway 332 and FM 523. A bus will shuttle visitors to the location of the colony. Visitors must present a photo ID in order to board the bus.

Profile by Maria Hart: The Black Skimmer is a distinctive member of the Gull family. They have uniquely long, bicolored bills, both black and orange, and a streamline body shape similar to terns. Skimmers can be seen laying flat, with both bill and body extended on the sand. While the exact reasoning behind this strange behavior is unknown, it is most likely done to reduce heat uptake and to give their neck muscles a break from holding up their enormous bills.

A Black Skimmer’s habitat ranges from Massachusetts, along the Atlantic and Gulf Coasts to Southern Mexico. Western populations range from southern California to southern Mexico and parts of South America. This species of waterbird will spend its entire life in coastal regions, although there are a small number of scattered populations that have been recorded inhabiting inland lakes in California and Florida.

Black Skimmers forage by “skimming” over tidal bodies of water such as bays, estuaries, lagoons, and saltmarsh pools. They skim with their lower mandible dipped in the water. When the bird senses a fish, the upper mandible snaps shut, capturing its prey. Skimmers prefer to do this over placid waters when winds are calm. They eat small fish and crustaceans such as shrimp and molting crabs.

Black Skimmers nest in remote areas, either on barrier islands or on quiet, isolated beaches. They prefer barren, sandy areas devoid of thick vegetation. Both males and females scrape medium sized indentations into the sand, shells, or stones before laying a four egg clutch. Skimmers sometimes nest in colonies alongside other terns and gulls.

Like many shorebird species, Black Skimmer populations are in decline due to rapid beach development. Breeding colonies also face problems with vehicles driving through nesting habitats. Studies have estimated that 87% of the Black Skimmer population was lost between the years 1966 and 2015. Houston Audubon’s Bolivar Flats Shorebird Sanctuary provides protection for these exceptional birds so make sure to keep an eye out for them next time you visit! 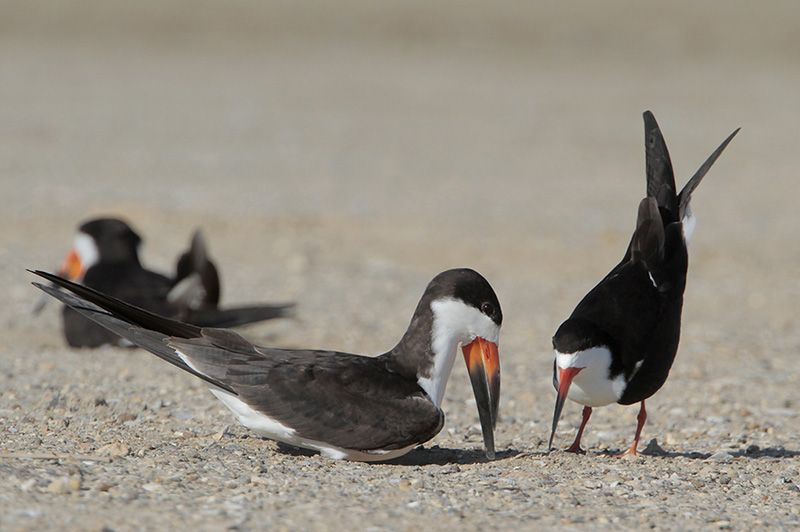 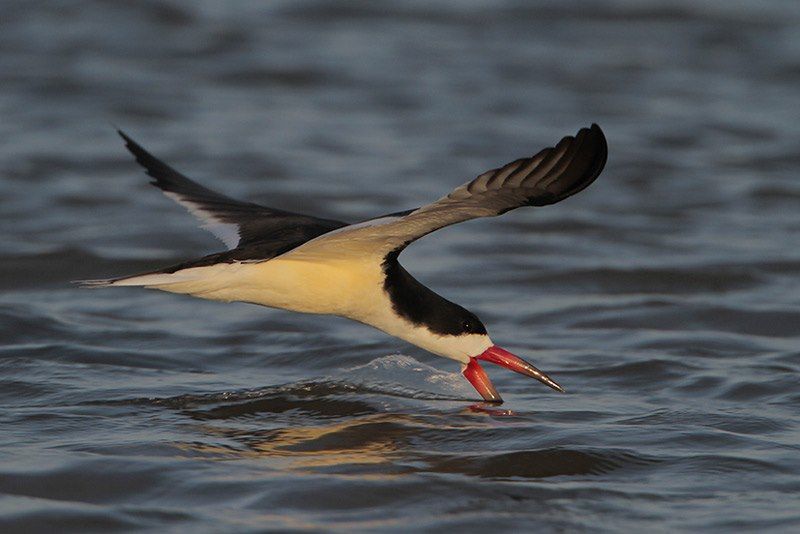 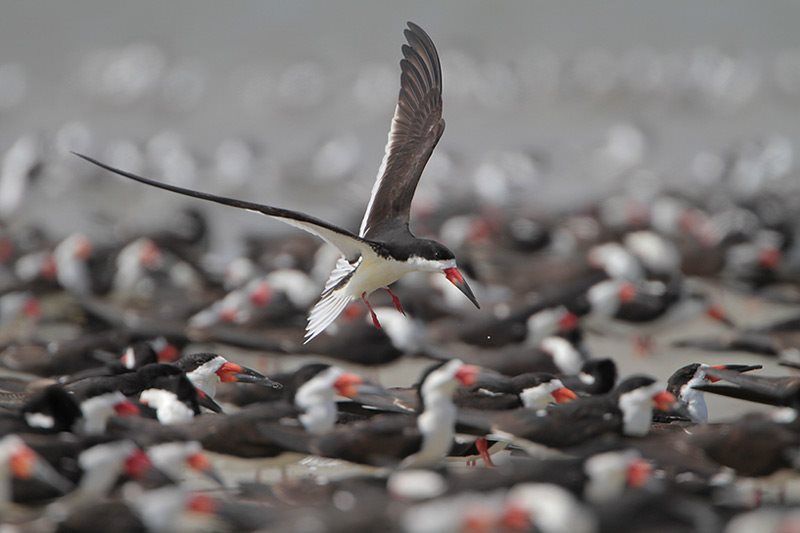